A Michigan solar developer is using a federal tax incentive to hire and train workers in low-income communities and help diversify the industry’s workforce.

A recent survey of nearly 800 solar companies across the country spotlighted a lack of diversity in the industry’s workforce nationwide. Companies that responded reported their employees being 74% male and 73% white.

In Michigan, Chart House Energy founder Rob Rafson hopes his company is helping to change that by committing to local hiring for projects built in federal Opportunity Zones, a program meant to vitalize low-income communities.

“In general, people hire who they know. You have this recurring theme in the industry that looks very male, very white,” Rafson said. “It’s hard to change one hundred years of employment practices but it is something we need to do. It’s critical for our future.”

Opportunity Zones are designated based on U.S. Census data. The program provides up to 15% tax relief for projects in low- and middle-income areas, as investors in projects can defer taxes on capital gains at various stages of development over 10 years. There are nearly 9,000 Opportunity Zones across the U.S. and its territories.

The program has been most popular with real estate developers, but some are also using it for renewable energy projects.

Chart House is capturing the tax benefits from an Opportunity Zone solar project in Ypsilanti, while others are under development in Muskegon, Grand Rapids, Flint and other Michigan zones. In Ypsilanti, the for-profit entity owns the system and monetizes the tax benefits and provides discounted power to the host facilities.

That could be where the story ended, but Rafson is going a step further by committing to hire project teams that reflect the communities where they are being built. It’s not a requirement of the federal program, but Rafson believes it’s not only the right thing to do but also a good business decision.

So far, Chart House has trained 106 workers to install solar projects — 57 of them are African American, four are Native American while 45 are white. All but one of them were men, indicating a lack of women’s representation, which Rafson calls a “social barrier” to overcome broadly in the construction industry.

Chart House’s model aims for 50% women and 50% African American representation among workers. The company works with community groups to place trainees in a pool ahead of planned projects.

Rafson said it’s important that these local organizations have “additional continuing services” to help the newly construction-ready workers after projects.

“For me, it’s the jobs that are going to be transformative more than the income,” he said. “The impact on a community is three to five times as much if you hire someone and get them a permanent job than the energy savings and other side benefits from installing renewable energy in the community.” 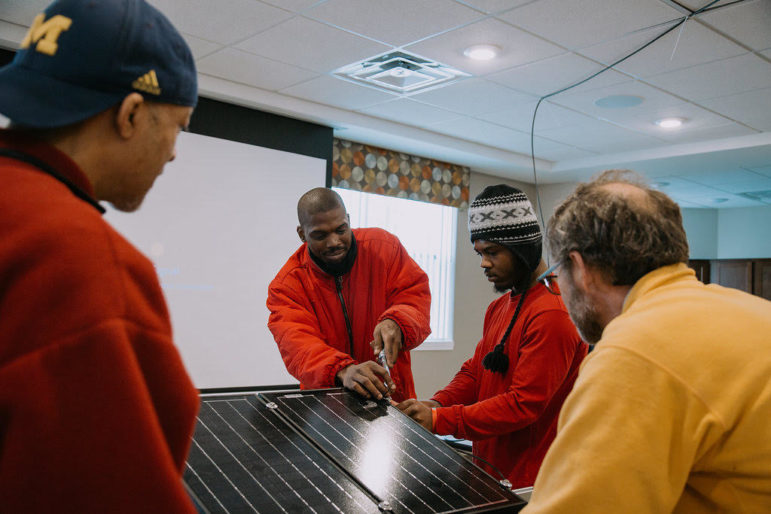 A downside to all of this, Rafson said, is the added training costs. Chart House prefers to have one experienced installer for each trainee. Getting workers to job sites can also be a challenge, though some groups have organized local ride-sharing or have directly funded transportation.

But the benefits of hiring local end up outweighing the costs, Rafson said.

“Other than patting ourselves on the back and doing a good thing, for me the economics of hiring local works,” he said.

For example, “hyperlocal” workers save on construction costs like reimbursing transportation, lodging and other expenses. Rafson expects electrician jobs to be some of the most in-demand and available occupations and has been encouraged to see other developers’ interest in apprenticeship programs.

“There is a real financial driver to hire local,” he said. “That’s a simple thing that literally could be added to the utility’s bid package.

“Unfortunately it’s something with a lot of talk around the idea, but there hasn’t been a lot of effective implementation in this sector.”

Bonanno agrees with Chart House that job training can be a transformational factor in Opportunity Zone renewable energy projects.

“The only version of success for us is if the transition [from fossil fuels] is done in an equitable manner so all people benefit and it’s not an exclusive club of centralized folks,” Bonanno said.

Since the federal law does not require any sort of measurements for societal benefits with projects, Bonanno said there is a debate within the industry about whether that should be required.

Rafson said Opportunity Zones provide enough “additional incentive to overcome many of the barriers financially to develop in poorer communities.” These included added security around job sites and mobilization and interconnection costs.

An Opportunity Zone project can be a springboard to a career. Rafson has heard from larger developers willing to put workers through apprenticeship programs after they’re trained to install panels.

“We can get them to be not only a functional solar installer, but also a journeyman electrician,” Rafson said. “That’s super exciting since that industry especially has been very poor at diversity.”

How do you think this translate to the utility sector-- are utility employees more likely to be stationary or will utilities equally suffer from...

Jill commented on ...
Maintaining a Leadership EDGE in Turbulent Times

Great question Matt. There are several ways to encourage bringing an outside advisor.

Matt commented on ...
Maintaining a Leadership EDGE in Turbulent Times