What California Stands to Lose in the Climate Legal Battle

In just a couple of weeks, the Ninth Circuit Court of Appeals will hear oral arguments stemming from the two California-based lawsuits where municipalities are suing energy companies for alleged costs associated with combating climate change. The energy companies will have their chance to tell the court that climate mitigation is a global challenge, best addressed by common sense regulations, rather than politically-motivated litigation.

In 2017, San Francisco and Oakland filed a lawsuit against five energy companies. In 2018, Federal Judge William Alsup dismissed the lawsuit, ruling that the courts were not the appropriate venue to set climate policy.

“In sum, this order accepts the science behind global warming. So do both sides. The dangers raised in the complaints are very real. But those dangers are worldwide. Their causes are worldwide. The benefits of fossil fuels are worldwide. The problem deserves a solution on a more vast scale than can be supplied by a district judge or jury in a public nuisance case.” (emphasis added)

Meanwhile, the County of San Mateo, County of Marin, City and County of Santa Cruz, City of Imperial Beach, and City of Richmond also announced their own legal pursuits, seeking to extract monetary damages from dozens of energy producers. Due to the similarity of their complaints, these other California cases were later consolidated under San Mateo.

In February, both cases will be presented to the Ninth Circuit Court of Appeals, where the same panel of judges will hear both the appeal by San Francisco and Oakland as well as the other energy companies’ appeal of remand orders that sent the San Mateo consolidated case back to California state court.

The cities’ claims ignore the fact that California still remains reliant on fossil fuels to grow its economy and sustain its high quality of life. As the state with the largest population and economy in the United States, California depends on reliable sources of energy to power its everyday life. Despite a slew of regulations, renewable energy pledges and aggressive efforts to decarbonize, fossil fuels maintain a strong presence across the state, supporting thousands of jobs, generating billions in state revenue and supporting adjacent industries like transportation, tourism and manufacturing. Climate litigation can have a direct impact on many aspects of California’s economy.

California stretches two-thirds of the way up the West Coast and is more than 1,000 miles long and 500 miles wide. The U.S. Energy Information Administration profile analysis says that “with such a great distance to travel, energy consumption in California is dominated by transportation.” In fact, the Golden State is the largest consumer of both motor gasoline and jet fuel, representing one-fifth of the nation’s total jet fuel use.

In 2019, over 200 million people flew to California, including about 80 million visitors to the San Francisco Bay Area alone. Thanks to fossil fuels, California remains the most visited state in the country, with 27 airports serving domestic and international visitors alike. In 2018, tourism grew by 5.4 percent in the state, generating $140.6 billion for the economy and contributing $11.8 billion in state and local tax revenue. California has the resources to innovate and became the leading economy in the U.S. thanks to these contributions.

Litigation against energy producers also puts California progress at risk and endangers vulnerable industries that rely on refined petroleum products, such as transportation/warehousing, manufacturing and agriculture. Together, these sectors represent 1.7 million jobs in California and contribute 8.4 percent to the state’s GDP. These lawsuits attempt to demonize the very companies who underpin large swaths of the state’s economy, revenue, and largest industries.

It may sound surprising, but California ranks third in the nation in petroleum refining capacity, just behind Texas and Louisiana, providing a network of pipelines connecting California with the rest of the country. Litigation not only affects California’s energy consumers, but would have a compounding effect on other states that rely on California for their energy needs.

One of the biggest job producers in California is the oil and gas industry. Here are just a few impressive facts, drawn from the Western States Petroleum Association’s report: 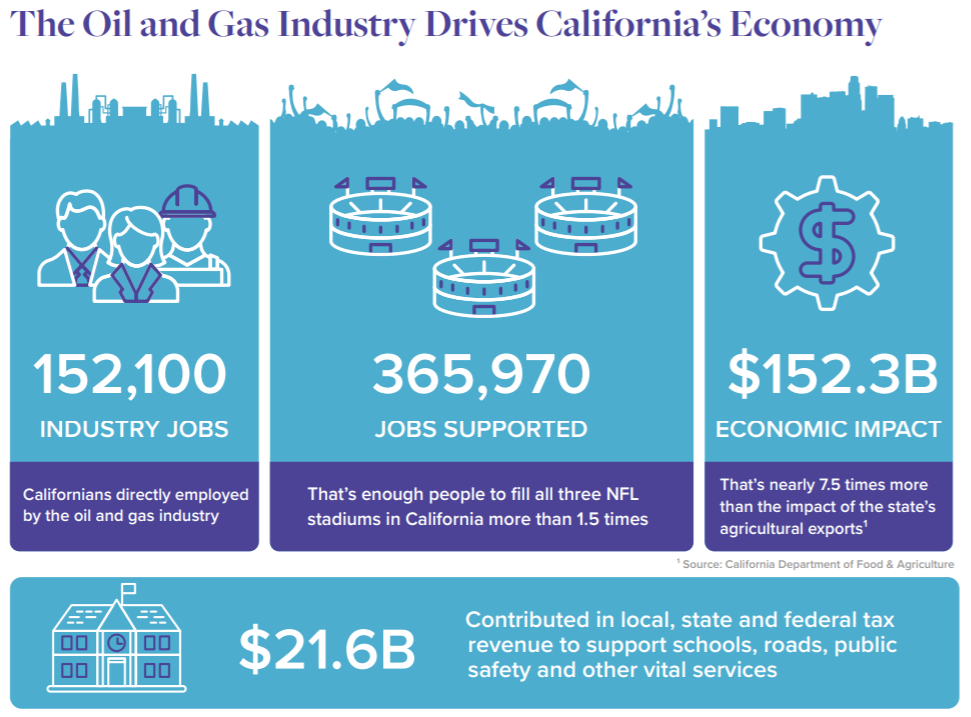 In the Bay Area alone, oil and gas companies support over 81,000 jobs and directly employ nearly 27,000 residents. Over $6 billion in wages and benefits have been reinvested in the local economy for homes, transportation, food, etc. While San Francisco and Oakland are pursuing over $15 billion in damages from energy producers, these companies are simultaneously injecting more than 3 times that amount – $51.6 billion – annually into the local economy.

The unjustified lawsuits not only impact those whose livelihood and income relies on the energy industry, but add burdensome costs to energy producers by forcing them to defend lawful energy production in court, while wasting hundreds of thousands in taxpayer dollars. City attorneys are also spending time and resources to prepare and review filings, as well as attending hearings and other court appointments, instead of focusing on other urgent issues that need to be addressed. Just a few years ago, Oakland City Attorney Barbara Parker was criticized for failing to implement court-ordered reforms for the city police force.

While municipalities gear up once again to go after energy producers in court, oil and gas companies continue to contribute billions to California’s economy. Bringing companies to court instead of focusing on real solutions that will yield results is a waste of time and taxpayer resources for California cities and municipalities. As Judge Alsup has ruled, courts are not the appropriate venue to address climate policies and are a counterproductive approach. The ones who stand to bear the greatest losses are Californians who rely on oil and gas every day to go to work, visit their friends and family, and power their lives.

The post What California Stands to Lose in the Climate Legal Battle appeared first on EnergyInDepth Climate and Environment.

Indeed Matt, this is however a significant statement of intent by Shell.

Green hydrogen production, initially in the Eemshaven and later possibly also offshore, is expected to be around 800,000 tonnes per year by 2040...