These interactive presentations contain the latest oil & gas production data from 102,269 horizontal wells in 11 US states, through January 2019. Cumulative oil and gas production from these wells reached 10.6 Gbo and 113 Tcf. Ohio and West Virginia are deselected in most dashboards, as they have a greater reporting lag. Oklahoma is for now only available in our subscription services. 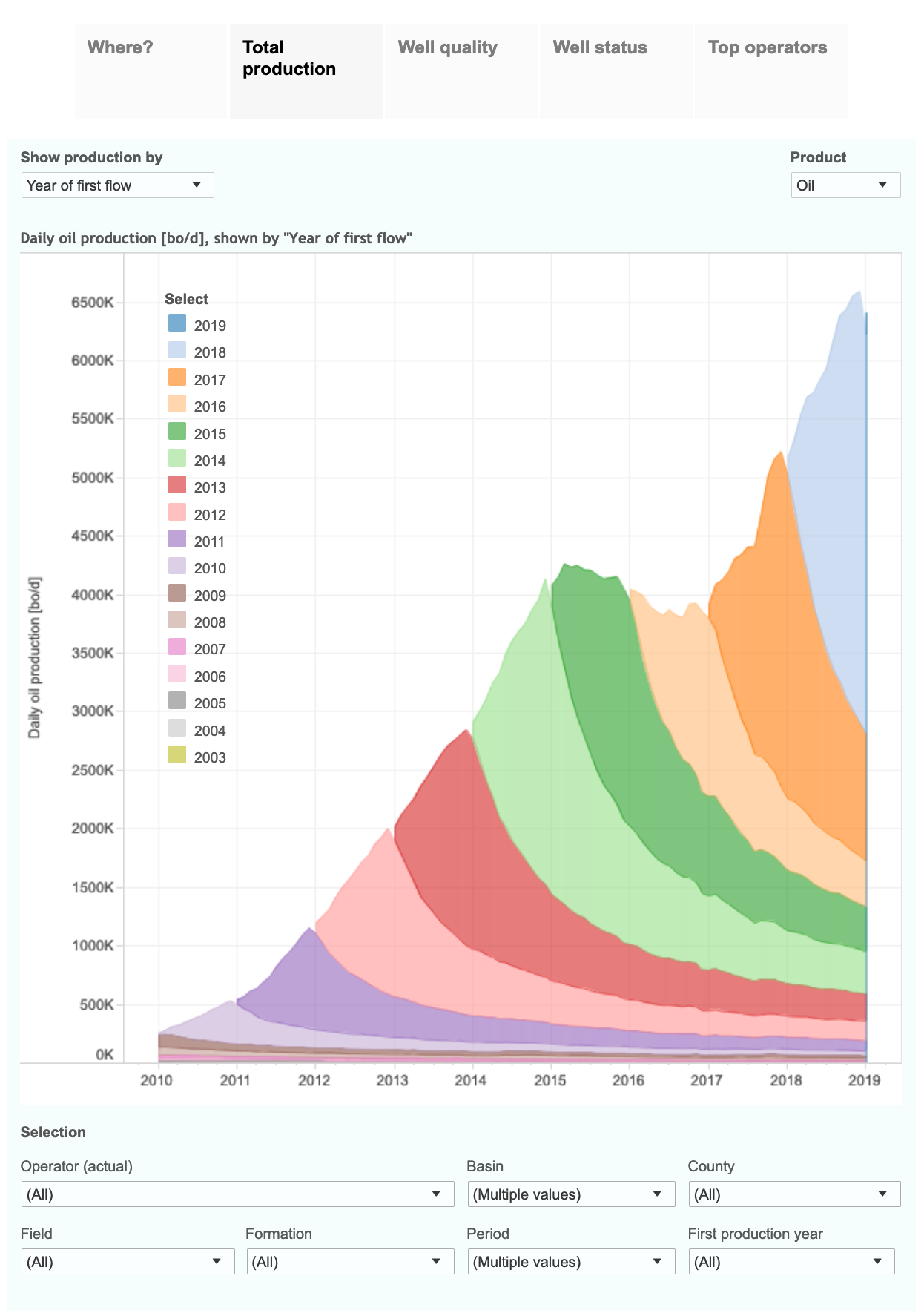 January production from these wells was at a similar level as a month earlier, with about 6.6 million bo/d (after revisions). The Permian has been responsible for most of the growth in the past 2 years. If you exclude this basin (using the “Basin” filter at the bottom), you will see that combined production in the other basins only surpassed the 2014 peak in December.

The “Well quality tab” reveals that average well productivity in the major tight oil basins increased again in 2018, but only slightly. Also in this regard did the Permian have a positive impact; if you deselect this basin, you’ll note that the improvement is even smaller without it.

The final tab lists the top 5 operators in these basins. EOG increased its output by almost 50% in the past 2 years, and is now close to 600 thousand bo/d of operated capacity. 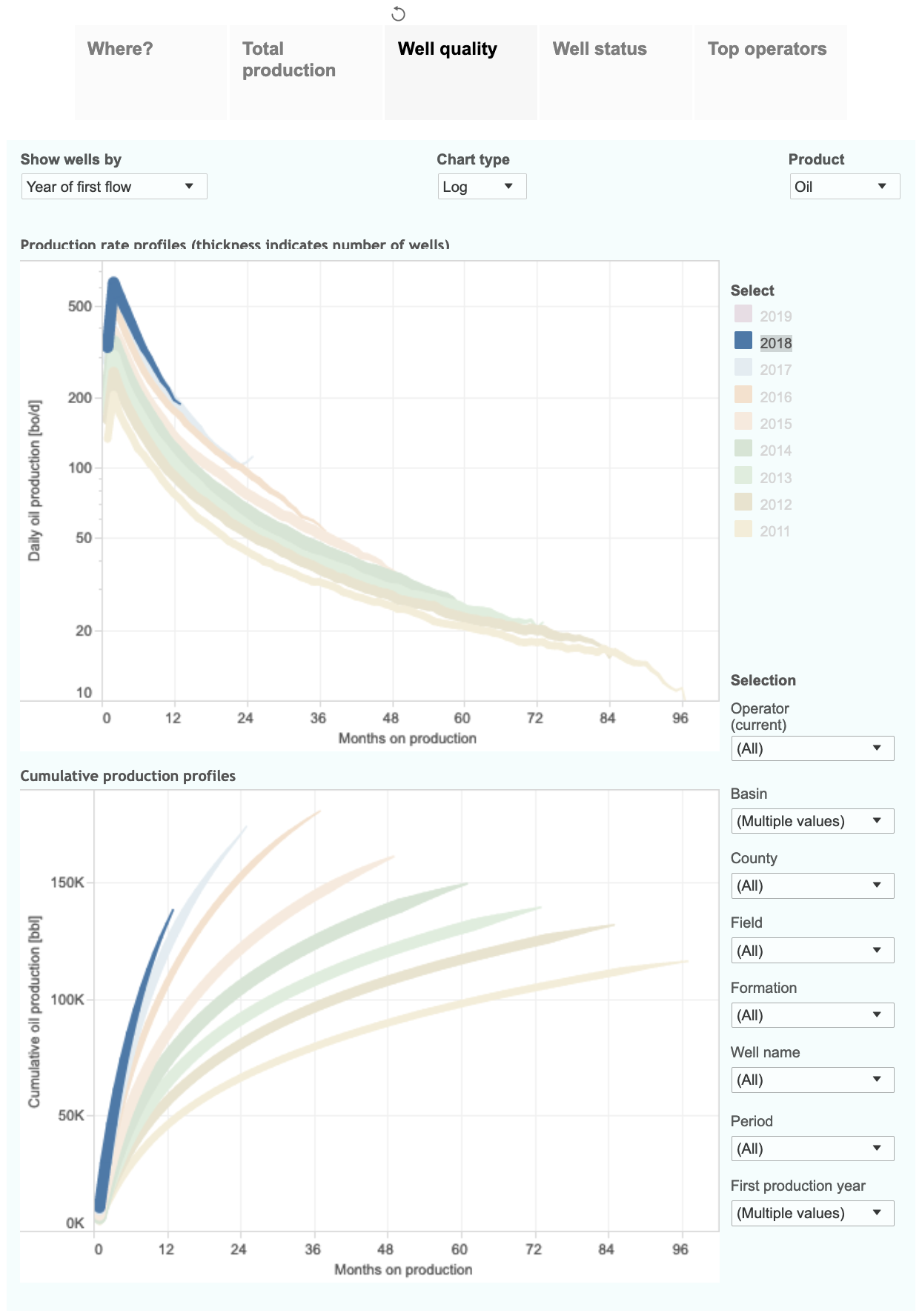 This “Ultimate recovery” overview shows the relationship between production rates and cumulative production over time. The oil basins are preselected and the wells are grouped by the year in which production started.

If you switch Product to “gas”, you’ll see the natural gas production profiles for these same wells, most of it associated with oil production. These profiles have also improved a lot in recent years; the almost 8,000 horizontal wells that started in 2017 are on a trajectory to recover over 1 Bcf of natural gas each, on average. Of course there are major differences between and within these basins.

Early next week we will have a new post on North Dakota, which will release March production data by the end of this week.

In our subscription services you will always find the most recent data, as we process many of our data sources on a daily basis. For most states we already have February or even March (Wyoming and Montana) production data. Even with the $52/month Analyst subscription you can already access this data.

Production data is subject to revisions. For these presentations, I used data gathered from the sources listed below. 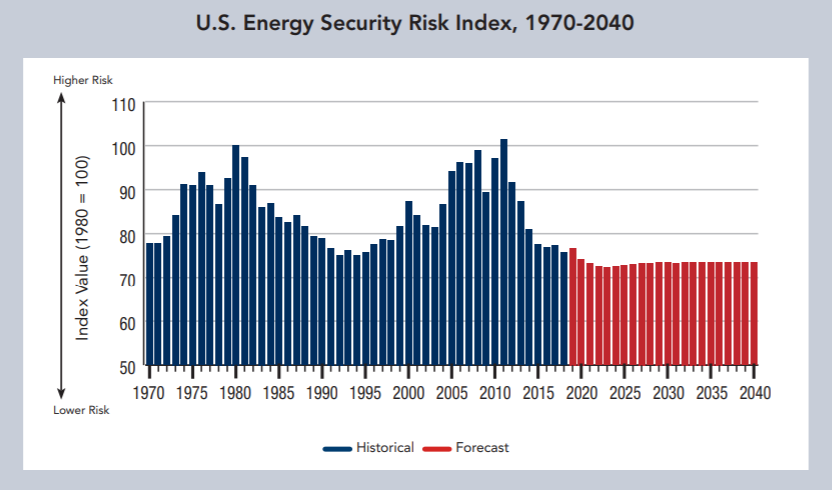 America Has Record High Energy Security, Thanks to Shale Revolution

Energy security risk in the United States has reached its lowest point since 1995, according to the Global Energy Institute’s (GEI) 10th annual Index of U.S. Energy Security Risk. This represents a remarkable shift from GEI’s first report in...

AI, A Menace to Stability?

Artificial Intelligence(AI) and Machine Learning(ML) are boosting productivity and efficiency in the energy sector. Notice the challenges and successes of implementation. How much are you willing to hand over to machines?

America Has Record High Energy Security, Thanks to Shale Revolution

AI, A Menace to Stability?

Rupam commented on ...
How the Oil and Gas Industry Can Improve Sustainability

Though Electrification is very good idea but it is not possible to electrify whole world in a year.

The partners will bring to the US experience on massive European projects including Hornsea 1, the world's biggest offshore wind farm off eas

Charley, the message here seems to be