Rolling Stone author Justin Nobel has been spending a lot of time in the Appalachian Basin recently, and not because some of the biggest bands in history will be touring here this year, as one would expect from the music magazine. Instead, Nobel has been conducting a tour of his own, amplifying “Keep It In the Ground” research and messaging, and writing his latest misleading hit piece on the oil and natural gas industry.

His latest article claims that the industry is knowingly exposing workers and communities to high levels of radiation through the produced water and solids that result from drilling. And while he peppers in statements from regulatory officials, the overall image he paints is a false one, of an unregulated industry, despite this being one of the most regulated industries in the country.

Here are three key things to keep in mind when reading the Rolling Stone article:

Fact #1: This isn’t the first time Rolling Stone or Justin Nobel have misled the public.

Rolling Stone suffered “a loss of reputation, journalistic credibility and $3 million,” when it was forced to retract and admit that a story it ran in 2015 was completely made up.

Similarly, Nobel’s and the magazine’s coverage on oil and natural gas – whether it was blaming infant deaths on drilling in Utah, portraying pipelines as underregulated and unsafe, or misleadingly praising a compendium full of debunked research as a “new” “authoritative study,” among others –  has been high on KIITG rhetoric, but short on actual facts. 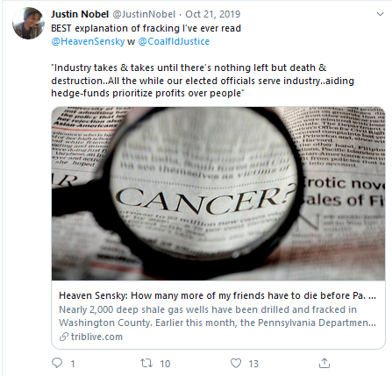 Fact #2: Multiple regulatory agencies have determined oil and natural gas activity is not a health concern.

Contrary to Nobel’s claims that radon and radiation have not been well-studied, a multitude of research has been conducted on both radon and technically enhanced naturally occurring radioactive material, or TENORM.

To his credit, Nobel mentions a 2015 Pennsylvania Department of Environmental Protection study that found “there is little potential for harm to workers or the public from radiation exposure due to oil and gas development.” But Nobel included criticism of the report from Marvin Resnikoff, whose own research has been intensely scrutinized, including by the U.S. Geological Survey that said Resnikoff “relied on theoretical calculations utilizing limited data from geologic analogs.”

Nobel and Resnikoff criticized the PaDEP report for “ignor[ing] the well-documented risks posed by the inhalation or ingestion of radioactive dust,” but in fact, PaDEP’s study did consider inhalation in its study. Specifically as it pertains to one of Nobel’s major talking points, the spreading of brine (produced water) on roads, PaDEP found “limited potential” for people enjoying the outdoors to be exposed to radiation from this practice, explaining:

“The recreationist is an appropriate exposure scenario based on the remote location of the roads. A recreationist, such as a jogger or hunter, usually spends less time on the impacted area, e.g., two hours a day, three days a week, than a resident. However, a recreationist may have a higher inhalation rate than a resident. Recreational land use addresses exposure to people who spend a limited amount of time at or near a site while playing, fishing, hunting, hiking, or engaging in other outdoor activities.” (pg. 158)

Not only does the Rolling Stone article fail to include PaDEP’s findings on brine being used as a road de-icer and for dust control, but there’s also no mention of other state agencies’ findings. For instance, Ohio Department of Natural Resources has also been studying the application of brine on roads. ODNR spokesman Adam Schroeder recently told The Columbus Dispatch:

“The (Ohio Department of Natural Resources Division of Oil & Gas Resources Management) has collected brine samples from both brine hauler trucks and wells. These samples are helping the division to establish baseline radiological data on naturally occurring radioactive material in produced brine from different geological formations.”

“Recent models from both the Ohio Department of Health and the Pennsylvania Department of Environmental Protection show that controlled application of brine containing naturally occurring radioactive material offers a negligible risk to human health.” (emphasis added)

Further, Nobel included criticism of the Pennsylvania report for “downplay[ing] the radioactive gas radon,” but ignores the WVDEP’s findings that:

There is also no mention that New York Department of Environmental Conservation reached similar conclusions to PaDEP on TENORM and public health in 2013:

“Based on currently available information it is anticipated that cuttings and flowback water will not contain significant levels of naturally occurring radiological materials (NORM)…. Any potential worker-health or waste-disposal impacts related to concentrated NORM are already subject to controls under existing DOH and DEC regulations…with those measures in place, potential significant adverse impacts on human health from NORM exposure are unlikely.”

Separately, radon has also been studied extensively in Pennsylvania where homes historically have significant issues with the gas, including in areas well outside the Marcellus Shale region.

In 2016, researchers at Carnegie Mellon University released a report concluding “there is no support” to back up activists’ claims about cancer risks from radon in Marcellus Shale gas. This research was supported by the PaDEP’s citizen’s guide on radon that explains:

“Radon from soil gas is the main cause of radon problems” in homes in Pennsylvania.

Fact #3: The oil and natural gas industry is strictly regulated, including in how it manages solid waste and produced water.

There are strict regulations on how the drill cuttings and other solids that result from shale development are tested and disposed of. In Pennsylvania, for instance, Chapter 288 of Pennsylvania’s Residual Waste Landfills regulation regulates all solid waste and includes sections of the Radiation Protection Act, which specifically regulates disposal of drill cuttings into landfills. In addition to monitoring, these regulations even dictate specific areas of the landfill that can be used for materials releasing radiation:

“For noncaptive residual waste landfills, a designated area for vehicles for use in the event of the detection of waste containing radioactive material. The designated area shall, by location or shielding, protect the environment, facility staff and public from radiation originating in the vehicle. The Department’s ‘‘Guidance Document on Radioactivity Monitoring at Solid Waste Processing and Disposal Facilities,’’ Document Number 250-3100-001, describes various factors to consider in determining an appropriate designated area.”

Produced water is also strictly regulated and typically managed by recycling and reuse, disposal in injection wells or treated at facilities licensed to process the water. Importantly, approximately 90 percent of the brine produced in Pennsylvania is recycled and reused in the development of future natural gas wells. In Ohio, because of its more extensive network of injection wells, that is the more common form of management.

Notably, this isn’t the first time that Nobel has painted an image of Ohio’s injection wells being dangerous. EID took him to task in 2017 for similar claims, and the fact remains that the state’s injection well program is one of the best in the country, and has been described as a case study on best management practices. In 2015, the U.S. Environmental Protection Agency evaluated Ohio’s compliance under the Clean Water Act, Clean Air Act, and Resource Conservation and Recovery Act, concluding that ODNR is running a “good quality program.” And the Groundwater Protection Council stated:

“Ohio is at the forefront of regulating Class II injection wells and is continuously advancing regulations of the UIC program. ODNR’s ongoing efforts provide the necessary protections to help ensure that Ohio’s underground drinking water resources are safe.”

The health and safety of its workers is a top priority for the oil and natural gas industry across the country. That’s a fact that continues to be demonstrated through in-depth trainings and procedures, the sole purpose of which is to protect the people whose work fuels the world. Nobel’s latest piece is one in a long line of biased imitations of investigative journalism that push a “Keep It In the Ground” narrative, while ignoring science.