With demand for natural gas set to grow through 2035, North America is well-positioned to be the top LNG exporting region in the world. This is welcome news for Canada and its LNG Canada project, which is projected to be completed within the next five years. According to a new report from McKinsey and Co.,

“Demand will continue to grow from 95 billion cubic feet per day (bcfd) to 125 bcfd by 2035 then plateau. More than 70 percent of the demand growth is driven by gas exports (both LNG and also piped exports to Mexico). This scenario depends on full implementation of current decarbonization policies but does not take into account any broader policies that may be introduced in future.”

The plateau of demand that McKinsey forecasts is due to current decarbonization policies—particularly in the United States—though the report indicates that:

“North America will continue to rely on gas for domestic use and exports, although domestic demand will start to decline after 2035.”

Increasing demand for natural gas over the next decade and a half is due to Asian markets. According to McKinsey, North American gas exports should grow from 9 billion bcfd to 30 million bcfd over the next ten years. Given the closer proximity of LNG Canada to Asian markets relative to the Gulf Coast, this growth in demand will likely benefit Canadian energy producers.

McKinsey forecasts that the majority of supply growth for natural gas will come from North America—mostly in the United States:

“The bulk of supply growth—70 percent—will be driven by four nodes: the Appalachian basin in the northeastern US, the largest and most prolific basin; gas from the Permian, primarily in west Texas, which is associated with oil production; SCOOP/STACK gas production near LNG-demand centers on the Gulf Coast; and shale-bas production in western Canada.” 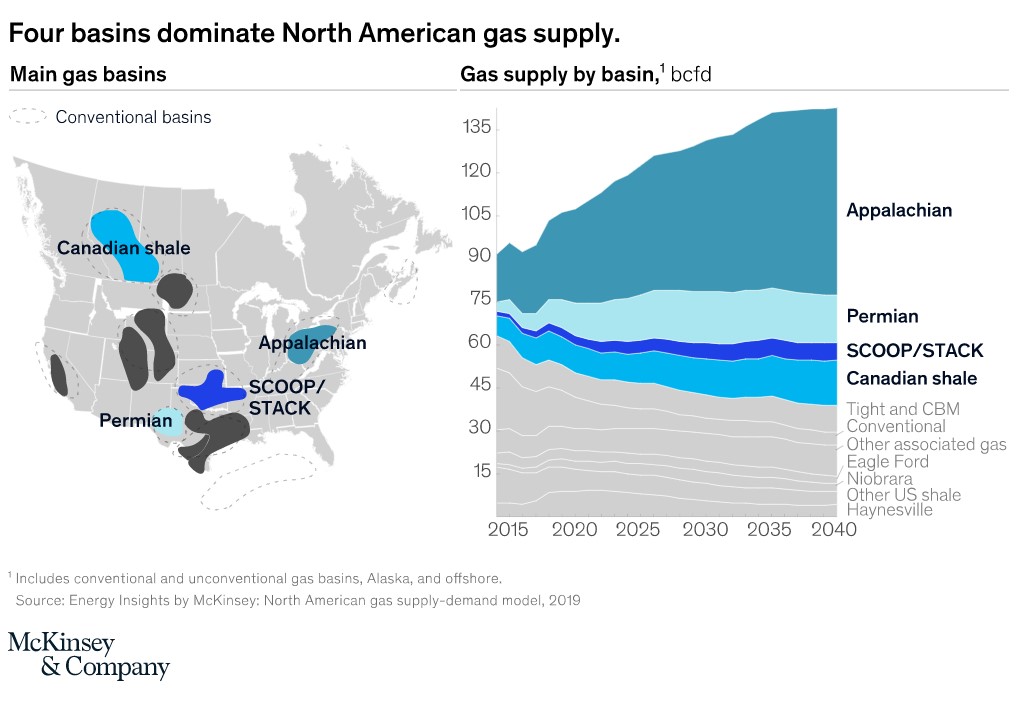 Also, despite the fact that McKinsey estimates that North American demand will plateau by 2035, an increase in renewable energy sources will not fully discount natural gas’s continued importance:

“Although economic- and mandates-based investments in renewables will grow significantly, the flexibility afforded by gas-fired power generation will continue to be in demand. Alternative sources of flexibility—such as energy storage—including pumped hydroelectric and utility-scale batteries—and demand aggregation and responses, are unable to affordably provide the same reliability as gas-fired power plants.”

Although the Appalachian and Permian basins will provide the largest supply growth to meet LNG demand, Canada has enormous opportunity. As the fifth largest producer of natural gas, Canada can play an important role in meeting increased global LNG demand, thanks to the construction of its first export terminal—LNG Canada—as well as the projection that another three facilities will become operational within the next three to five years.

Unfortunately, activists have threatened Canada’s further resource development. Protesters recently blocked construction on the Coastal GasLink pipeline, a necessary pipeline for LNG Canada, despite the fact that all elected Indigenous Councils have signed contracts with Coastal Gaslink and the British Columbian Premier John Horgan has voiced his support for the project to continue, citing that the rule of law should prevail. This support mirrors the country’s: Canada has broad support for new pipeline construction and pipelines in general.

As the McKinsey report explains, “natural gas will continue to play an important role in North America’s energy mix over the coming decades,” due to its reliability and its flexibility, and Canada can be a leader in providing this important energy source to markets around the world.