The New York Attorney General’s Office (OAG) is refusing to comply with ExxonMobil’s discovery requests even after the New York Supreme Court ruled the company could proceed with discovery related to the AG’s investigation of its climate change disclosures. The company is seeking documents that would support its allegation that the OAG is pursuing its investigation in bad faith.

Since the OAG initiated its investigation into ExxonMobil more than three years ago, its arguments have shifted multiple times, as each of the allegations of fraud has lacked evidence. However, in addition to highlighting the questionable legal agenda, recent court filings demonstrate how the OAG has methodically denied ExxonMobil’s discovery requests in an effort to delay the exercise, possibly in the hope that the OAG can convince the judge to dismiss the company’s defenses.

Justice Barry Ostrager ruled in February that the OAG could file a motion to dismiss ExxonMobil’s defenses, but that in the meantime, “Exxon Mobil is privileged to pursue discovery on its defenses.”

“Civil litigants may not avoid their discovery obligations by challenging the legal viability of an adversary’s claims,” ExxonMobil writes in one letter to the OAG. “Therefore, ExxonMobil maintains that OAG’s objections are improper to the extent they are predicated on a legal challenge to ExxonMobil’s affirmative defenses. OAG may not credibly withhold documents responsive to the Affirmative Defense Requests.”

The OAG’s efforts to hinder ExxonMobil’s right to discovery stand in stark contrast to the actions of the defendant. For instance, the OAG claims that documents requested by ExxonMobil are protected by various privileges, “without identifying each document withheld and the basis for invoking any privilege,” according to one letter from ExxonMobil. In another letter, the company writes that the OAG’s reluctance to turn these documents over suggests that certain privilege assertions appear to be “facially dubious.” 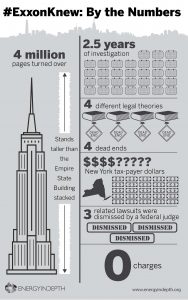 Conversely, ExxonMobil has provided the OAG with more than 2,800 pages of privilege logs. In fact, throughout the entirety of this investigation, ExxonMobil has turned over more than four million pages of documents; so many pages that they would stand taller than the Empire State Building if stacked on top of each other.

In letters to senior officials in the OAG, ExxonMobil refutes the legal basis of numerous discovery objections and highlight inconsistencies and contradictions made by the state’s top law enforcement office.

A prime example of New York’s attempts to stonewall the company is their failure to provide documents regarding their communications with third parties. According to one letter, ExxonMobil’s lawyers had phone call with the OAG in November during which the OAG denied conducting any “Third-Party Interviews,” stating that they “emphatically and unequivocally informed ExxonMobil that no such interviews had taken place.” However, in a letter written just two weeks later, the OAG contradicted its previous claim, noting that “OAG did communicate with third parties in the course of the investigation” and that it would “respond appropriately to any document requests that Exxon propounds” seeking “notes associated with those communications.”

However, when ExxonMobil asked for the identities of third-parties the OAG communicated with, the OAG claimed that the requested information was shielded by various privileges and protections from disclosure – without articulating how “the mere identity of persons or entities it communicated with constitutes privileged information.” As ExxonMobil states in a letter sent at the end of January:

The evidence provided in the dueling letters between ExxonMobil and the New York Attorney General’s Office suggest that the OAG is hoping to run out the clock and convince Justice Ostrager to dismiss the company’s defenses before the OAG runs out of delaying tactics.

“Further delay smacks of gamesmanship and an effort to engage in trial by ambush,” the company’s lawyers wrote in a letter to the OAG.

In early March the OAG notified ExxonMobil of its intent to motion to dismiss the company’s defenses or ask for a protective order, adding that they were no longer obligated to comply with ExxonMobil’s discovery request while their motion is pending. The OAG adds that they intend to continue to collect and review documents in accordance with a severely reduced list of custodians and search terms they proposed to ExxonMobil back in February.

The post In Defiance of Judge’s Ruling in Climate Case, New York Attorney General Refuses to Comply with Discovery Requests appeared first on EID Climate – A Project of IPAA.

That methane emissions have been reduced is a fiction that I wonder how anyone could possibly believe.

Speak on what you know and admit what you don't. You'll be amazed at where your conversations will take you