The New York attorney general’s (NYAG) office attempted to take on ExxonMobil with multiple legal theories starting with the bogus “Exxon Knew” narrative. But the NYAG could only come up with questions about accounting practices and ultimately dropped two of the charges at the 11th hour in their failed case. Justice Ostrager was clearly not impressed:

“At the conclusion of the presentation of the evidence, but before the completion of summations, the Office of the Attorney General withdrew its claims of equitable fraud and common law fraud contained in the third and fourth causes of action in its hyperbolic Complaint.” (emphasis added).

What was initially billed as the “climate trial of the century” turned out to be a total dud, but now activists in Colorado are barreling down a similar path against Exxon with charges that the NYAG either abandoned or saw firmly rejected by the court in an effort that will surely cost taxpayers a lot of money.

To fully understand the uphill battle facing the Colorado plaintiffs, it’s important to understand how badly the case in New York flamed out.

Then-Attorney General Eric Schneiderman launched an exhaustive three-year investigation into ExxonMobil in November 2015 that resulted in, well, not much. ExxonMobil eventually told the New York AG’s office to “put up or shut up” because a review of four million documents never turned up a “smoking gun” and it became clear that Schneiderman would never able to bring “Exxon Knew”-inspired charges to trial – the very type of accusations against energy companies knowing about climate change that the Colorado plaintiffs are currently attempting.

Schneiderman then alleged in 2016 that ExxonMobil failed to disclose risks about climate change to investors. That was also withdrawn, so Schneiderman finally settled on a claim in 2017 that the company misled investors about how it applied a “proxy cost of carbon” to its business operations.

By the time current Attorney General Letitia James brought the case to trial in October 2019, “Exxon Knew” accusations were far in the review mirror, replaced by questions about ExxonMobil’s accounting practices. Yet after all of the years of investigation and public mud-slinging, the NYAG’s office found itself on the losing end this week.

The AG’s office brought these charges under the Martin Act – a broad securities fraud statute that is viewed as the strongest of its kind in the nation – yet still couldn’t secure a favorable decision. New York tried to go big with the trumped up “Exxon Knew” campaign, was forced to scale back to an accounting argument, and was still decisively defeated even with a powerful securities law on their side that other states like Colorado don’t have.

The verdict in New York should be an indication to those pursuing similar legal pursuits that the manufactured “Exxon Knew” campaign is turning into a total flop.

Yet, here in Colorado, those warning signs are being ignored.

But that’s not all. The activists in Colorado are working from the same playbook that was used in New York. Boulder County is being represented by EarthRights International, a law firm that receives funding from the Rockefeller Family Fund – the group that helped conceive and bankrolls the entire #ExxonKnew campaign.

EarthRights International is also connected to numerous other activists and lawyers that are key players in the climate litigation game including Tom Steyer, Matt Pawa, the Rocky Mountain Institute. 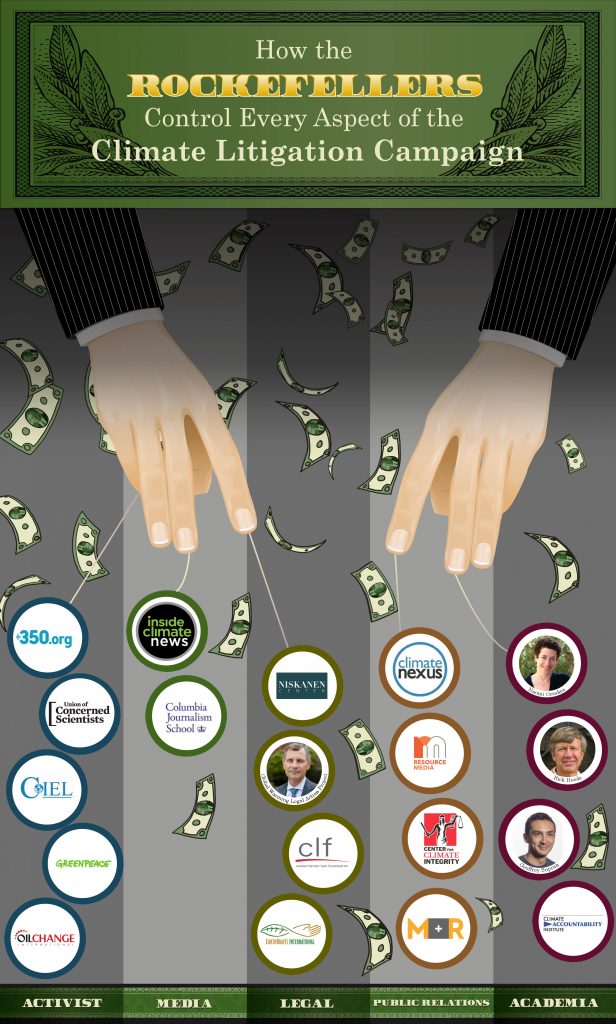 From the funders to the lawyers to the strategy, the activists in Colorado are clearly pursing the same game plan that New York attempted to use but had to abandon before ultimately failing altogether.

Now the top lawyer for Boulder County is trying to distance their case from New York. David Bookbinder of the Niskanen Center, who has clear ties to the Rockefellers and is representing Boulder County, published a blog immediately following the New York decision claiming that what happened there will have no bearing in Colorado, Massachusetts, or elsewhere.

But his entire argument is based off ignoring the failed accounting accusations and focusing back on #ExxonKnew:

“There was no reference regarding what Exxon has been saying about climate since 2016, and nothing about what Exxon knew about climate disruption and failed to disclose–or knew and affirmatively lied about–for the previous 60 years.” (emphasis added)

What a regression. Bookbinder – shell-shocked by the defeat in New York – has reverted back to the original accusations brought by then-NY AG Eric Schneiderman in 2015 which were quickly abandoned because Schneiderman had no proof.

The case brought by Boulder County has received plenty of attention for being the first of its kind in a landlocked state, but the more apt analogy is that the plaintiffs have found themselves on an island.

During his winning campaign for governor last year, Jared Polis refused to endorse the lawsuit, instead talking up his own legislative agenda. Likewise, Polis’ predecessor, former Gov. John Hickenlooper and his administration showed no enthusiasm for the suit.

Attorney General Phil Weiser – leading the exact government office that activists have tried to recruit – vetoed the idea of using his office to take on a similar case. He said during his campaign last year:

“This is what happens when you do your homework. You ask a basic question like, let me get this straight, our carbon footprint has been reduced by substituting natural gas for coal. How do you sue Exxon for causing climate change? That is a very hard question. I’ve asked it, I haven’t gotten an answer. And so, I’m uncomfortable with that litigation because the case for it hasn’t been made.”

Conservation Colorado, a leading environmental group in the state, declined to back the lawsuit just a month after it was filed.

The Denver Post editorial board criticized the lawsuit, saying that comparing fossil fuels and tobacco “dangerously miss the mark,” in a firm rejection of a favored activist talking point.

The editorial board wrote:

“Without fossil fuels, transportation would stagger to a halt, agricultural productivity would plummet, millions would suffer from cold, heat and hunger, and untold legions would suffer premature death. That’s why any comparison between fossil fuel companies and the tobacco industry, whose product is a health disaster with no redeeming economic value, is so wide of the mark…

“Such lawsuits are especially unfortunate in a state like Colorado where tens of thousands of people work in a vibrant energy industry and understandably do not consider themselves engaged in a malignant occupation. And yet when the companies they work for are stigmatized and even demonized for engaging in commerce still critical to our economy, by extension so are they.”

“A second difference is that tobacco use is not an integral part of society in the same way as energy, so it is harder to argue energy production is an unreasonable activity or a nuisance. With sufficient motivation, Americans can put out that last cigarette, but no amount of motivation can remove every need to heat our homes, put the kids on a school bus, rush the injured to a hospital, or fly to the next business meeting. In Boulder’s world view, Suncor and ExxonMobil should have stopped producing and marketing their products when climate change concerns surfaced in the 1980’s. But instead, oil and gas companies created jobs, enriched Americans and strengthened our national security.”

Add in the former head of the Colorado Department of Natural Resources, leading figures from the Colorado manufacturing and industrial sectors, and lawyers opposing the “weaponization” of science, it’s pretty clear that Colorado, a state that places a great value on protecting the environment, feels that the Boulder County lawsuit is the absolute wrong thing to do.

The New York Attorney General’s office tried to go big with #ExxonKnew accusations but couldn’t even make a case strong enough to include in their trial. And what they did finally land on what was firmly rejected by the court despite having the toughest securities law in the nation on their side.

Now Colorado is going down this same path without the support of the governor, the attorney general, and the state’s most prominent newspaper and lacking the advantage of a robust statute to bolster their case.

#ExxonKnew completely collapsed in New York and its bad news for the efforts to replicate it in Colorado.

Florida voters will not have an opportunity in November to gain their energy freedom.