If you missed Part I of this interview, be sure to read that first at this link.

As mentioned in the first part of this interview, Arnold McKinley is a Teaching Fellow at University College London who will be presenting at DER SmartGrid Integration 2019 conference later this year. Arnold is focused on the changing requirements associated with the power grid of tomorrow, namely as embedded microgrids become more prevalent and pervasive. His talk at the conference later this year is titled 'Embedded Microgrids -- examining the requirements for local electricity generators and loads to operate as microgrids both connected to and independently of the traditional grid.'

Arnold was not only kind enough to allow Energy Central to ask him some questions on his work, but he also brought with him Travis Kauschke of South Australia Power Networks to provide insights from the industry perspective to complement Arnold's academic findings.

Matt Chester: A lot of focus is on how the industry will adjust to the changes related to distributed generation, microgrids, and the evolving energy sector, but how will these changes affect the end customers of electricity?

Arnold McKinley: I like to tell the story this way: What if we knew back in the 1890s how to make electricity from sunlight? At the time we were learning how to make electric motors and batteries and combustion engines. Put a combustion engine in the car, go to the front of the car and turn a crank; out the back poured dirty smelly smoke and sometimes people's arms broke from the reverse kick of the crank. Put an electric motor in the car and there's no smoke, not much noise. Everything else about the car is the same. Which would people choose? Where would research focus? Probably as much into the physics of batteries and energy storage as into combustion engines. Over time, we would be powering up our homes with solar and running industrial processes with oil. It has been 120 years now and we have highly efficient and powerful combustion engines, and it is a surety that we would have highly efficient and powerful electrical motors for cars, storage systems for electrical power, and highly efficient devices running them all. We wouldn't have needed all that oil drilling, shipping in from the Middle East, and coal mining that led to all those wars over resources. We wouldn't now have a climate problem. So, it is a matter of evolution. Given a few more years, a bit of new technology and research, a bit more entrepreneurship, and we will have the ways and means of a pretty amazing system.

In fact, if you look at demand then about half of it is for industrial temperatures up to 1,000 degrees Celsius and half of it is for temperatures down around 100 degrees Celsius. The only thing that distinguishes the types of demand in either regime is the energy density needed. Large commercial, for example, needs a lot of 100 degrees Celsius power in a small area, but small commercial and residential do not. We ought to be thinking about these parts of the grid as fraternal twins that grew up side by side. They look alike, but their needs are quite a bit different because they are different in their core genetics.

I am looking towards the day when most ordinary 100 degrees Celsius power comes from locally-generated sources and industry is fed with wind. This could be a day in the future in South Australia with planning and sufficient evolution.

Travis Kauschke: I believe end customers will need to become savvier with new technology and become more engaged with energy in general. In Australia, there is a divergence between the 'haves' and the 'have-nots,' but it's now driven by information as much as it is driven by finances.

MC: You suggest that a proper response from the utilities will be to essentially face the music and rethink the structure of the grid-- particularly with the use of embedded microgrids and by embracing distributed energy. Are there any regions where this type of thinking has already been implemented that can be used as a roadmap for other regions?

AK: Not widely yet, but good solid development is taking place in the southwestern United States, particularly in California and Arizona. The California government, always at the forefront of innovation, is regulating a direction for the industry toward renewables, solar, and microgrids. And the utility industry is following, intending to keep its hand in the pie as best it can. They are keeping those microgrids on the grid but letting them go self-sufficient and independent where they can. The experimentation is at fever pitch there at the moment.

But California is not alone. Projects that delineate separable, or embedded, microgrids in urban and rural settings are gaining momentum around the United States. These are systems of commercial and residential load that source their main power from locally-generated solar. They use battery storage to make it through a series of rainy days. It will take some evolution to get these to a point where they do not need to rely on the grid for backup, but even so it makes a good deal of sense to keep them on grid. The New Jersey Board of Public Utilities is considering 13 microgrids. Japan is entering the embedded microgrid market, and for good reason given the lessons they have learned from natural disasters. 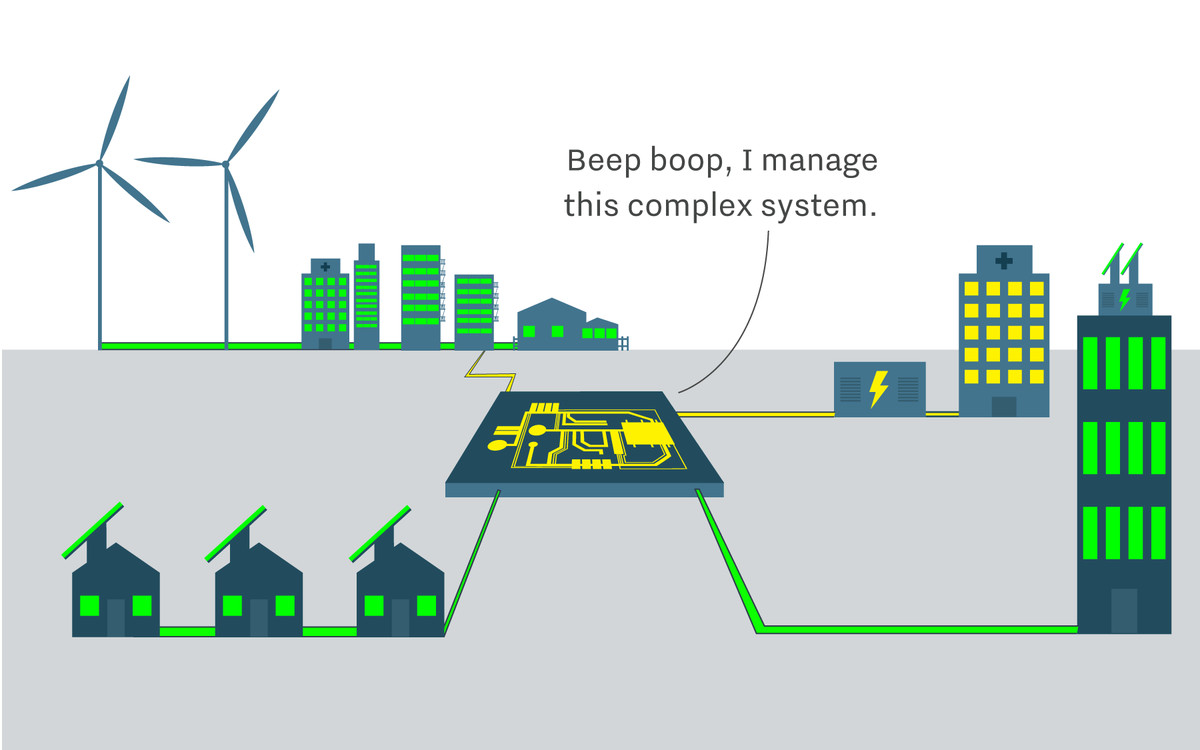 But the public utilities ought to be carefully looking at what's happening in the private sector. Tesla built up a reserve battery system in Hornsdale, South Australia, to carry the main grid through short, 15-minute periods of instability when needed, and it has been highly effective. With that success, Tesla offered to install 50,000 solar PV and battery storage systems on council homes to form a virtual power plant, then buy and sell the energy as would any generator. The idea of virtual power plants is now taking off around the United States, implemented with embedded microgrids. Blockchain is making all of this more likely. LO3 Energy in Australia, the United States, and now Europe uses what are called Exergy tokens, based on Ethereum to do the trading. Power Ledger also uses Ethereum. Reposit Energy has their own internal system and buys and sells with proprietary software. The third parties will wrest control over locally-traded power from the local providers if they are not careful.

TK: There's a lot of great work occurring in this space. In Australia, an Electricity Network Transformation Roadmap was developed with an outlook to 2027 by a consortium of energy networks (ENA) and the national science agency (CSIRO). ENA has also partnered with the market operator (AEMO) to undertake a project called Open Energy Networks to consult on the best way to integrate distributed energy resources into Australia's electricity grid.

MC: What will be the government's role in the restructuring of the grid? How can policy leaders be thinking two steps ahead to ensure a smooth transition?

AK: First, governments also need to get past the denial stage, but it is difficult when the coal and oil industry have them in their pockets. Both the U.S. and Australian governments are beholden to them at the moment. Those bonds will break, but in a true democratic, capitalistic culture they should have broken long ago.

Second, governments have also always supported the seeds of new innovation; grants to research studies to the universities and research institutions is most important for all technologies, not just these ones.

Third, governments are also helpful in subsidizing new ventures; they built the first roads for automobiles, the first railroads, and loosened regulations to support the first utilities. FERC in the United States, for example, opened up the transmission system to large-scale solar and wind generators and then opened it to small-scale solar generators. That's the government's role and it needs to continue doing it.

TK: In my opinion, governments should support decarbonization policy; subsidize renewable technologies; support utilities to develop the grid in a way that maximizes network hosting capacity (or the amount of distributed generation that can be connected); and focus on energy education for everyone.

MC: Is there anything else you'd like to tease out for the readers of Energy Central in advance of your presentation at the DER SmartGrid Integration Conference?

AK: Yes, the question I am most interested in is this: Now that we understand the grid system as a set of twins with different needs that can be handled with different sets of generation, how can we create an even more safe, secure, stable, lower cost, less polluting electrical grid? How do we get there? What's the path? It's a different future than the one we have today, and we have just started walking it.

Interviewer's Note: Arnold will be discussing these issues and more during his presentation at DER-SmartGrid Integration 2019 Conference. Keep an eye out on Energy Central and on the website for DER-SmartGrid Integration 2019 for upcoming conference date and other details ahead of the anticipated event in October. As mentioned, this presentation is titled "Embedded Microgrids -- examining the requirements for local electricity generators and loads to operate as microgrids both connected to and independently of the traditional grid.”