Why Electric Car Hype Is Overblown

Electric car mania is sweeping the globe and people are predicting the imminent death of the internal combustion engine (ICE) with increasing vigor. Even The Economist recently got in on the act. However, some simple objective analysis quickly shows that there is limited substance behind all the hype.

I should establish right up front that I do not dispute that battery electric vehicles (BEVs) will see impressive growth over coming years. The only point I wish to make is that their potential for achieving the rapid and economical emissions cuts the world so badly needs is very low. Money spent on electric car technology-forcing is therefore, in my opinion, a bad investment at a time when we really cannot afford bad energy investments.

This article will outline the most important arguments in this thesis.

And no, the fuel costs of electric vehicles should not be compared to the woeful American average fuel economy of 25 mpg. Electric vehicles are built for maximum efficiency so that they can get more range out of a given battery pack. They should therefore be compared to ICE cars that are built for maximum efficiency such as the Toyota Prius and the Hyundai Ioniq (both pushing 60 mpg). Obviously, these highly efficient ICE cars present the best benchmark for electric cars, given that they are also promoted as eco-friendly solutions with low fuel costs. 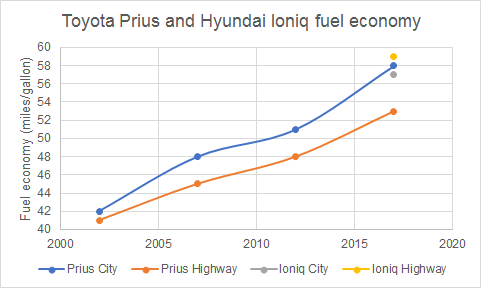 For example, comparing the fuel costs for the Hyundai Ioniq hybrid and electric versions shows only a small advantage for the electric car (which is $5000 more expensive with a battery pack of only 28 kWh). If electricity was taxed the same as gasoline (to pay for things like road maintenance), fuel costs would be essentially identical. Besides, at these efficiency levels, fuel costs are typically about 10% of total car ownership costs. A 10% fuel cost advantage one way or the other will therefore translate to a negligible 1% ownership cost differential.

As discussed in a previous article,  ICE and BEV drivetrains will probably end up with efficiencies around 50% and 80% (including charging losses) respectively in the long run. The following graph was created to show the electricity price where BEV fuel costs reach parity with ICE fuel costs for a range of BEV efficiency advantages. It is clear that BEVs enjoy no obvious fuel cost advantage under normal oil prices of $30-60/barrel. 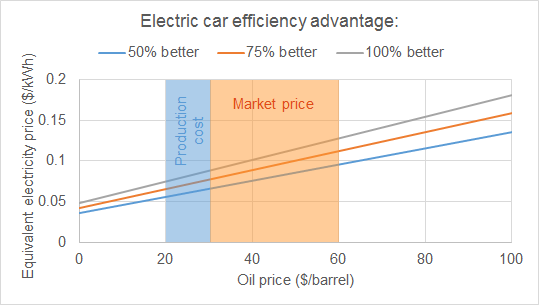 Arguably, the comparison should rather be made to average oil production costs ($20-30/barrel), given that the difference between market prices and production costs funds a large chunk of public spending in many countries. In this case, from an overall global perspective, fueling efficient ICEs can be significantly cheaper than fueling BEVs.

The CO2 emissions of BEVs relative to ICEs depends primarily on the electricity mix that fuels the BEV. In addition, the BEV battery leads to higher embodied CO2 of about 100 kg/kWh.  The graph below calculates the electricity CO2 intensity required by BEVs to emit less CO2 than ICE cars for the same three efficiency advantages displayed above. Future battery embodied CO2 is assumed as 50 kg/kWh and calculated on a 60 kWh battery pack lasting 250000 miles. 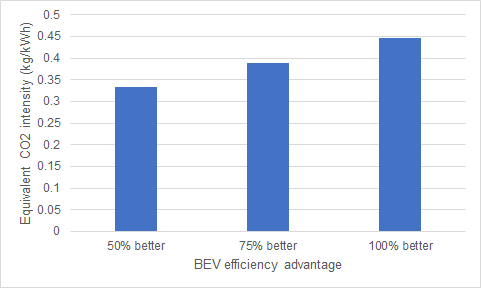 If the world finally manages to implement proper technology-neutral climate policies, CO2 intensity of electricity will fall faster. However, this will increase electricity costs, reduce oil prices and also accelerate the development of low-carbon fuels, thus keeping the ICE competitive.

In any case, at these efficiency levels, even high CO2 prices do not greatly impact car ownership economics. The graph below calculates the CO2 cost savings of BEVs at a CO2 price of $150/ton and a future BEV efficiency of 0.24 kWh/mile (including charging losses). Given that car ownership costs about $0.6/mile, potential BEV CO2 savings relative to regular gasoline are in the order of 1%.

The story is similar for other emissions. Local tailpipe emissions (e.g. NOx and PMs) from efficient ICEs are very low. For example, the graph below shows that only about 10% of total NOx and PMs of the Prius comes from the tailpipe. Incidentally, the total NOx and PMs tally for the Nissan Leaf is 75% higher than the Prius on the same site.

Battery electric drive is fundamentally best suited to vehicles driving shorter distances, i.e. commuting and general city driving. The longer the required range, the worse the economics get, especially for larger vehicles. A battery pack size estimate is given below for vehicles of different sizes with different range requirements. 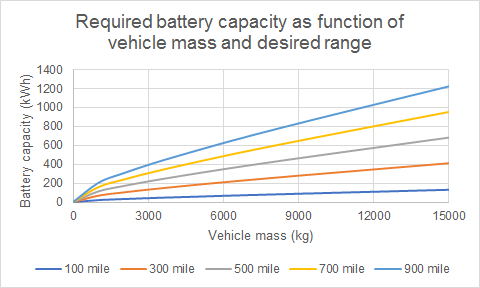 At a cost of $100/kWh for batteries and $25/kW and $50/kW for a BEV and ICE drivetrain respectively, the resulting cost comparison looks like this:

BEV attractiveness fades quickly with greater range requirements due to large battery pack costs. In addition, a greater range requirement generally means highway driving at relatively constant speeds where the ICE is at its best. For example, state of the art diesel truck engines operate at 47% efficiency and can potentially reach 55% efficiency with improvements offering a relatively short payback period. Future specialized highway cars will offer similar efficiencies as discussed in an earlier article.  These applications within the ICE comfort zone will be responsible for most freight and passenger transport energy requirements by 2040 shown below.

Fast charging stations offer a partial solution, but will substantially increase fuel costs for BEVs. Fast chargers themselves are relatively expensive,  imply peak-time charging with higher electricity prices, and may require expensive electricity transmission to remote locations. For example, Tesla’s superchargers now cost customers in California about $0.20/kWh – a price equivalent to $3.36/gal (excl. taxes) in a current hybrid that is half as efficient as a BEV. Tesla claims that they will make no profit at this price and long queuing times at supercharging stations suggest that more expensive capacity buildouts are actually required. More pessimistic assessments easily arrive at substantially higher fast charging costs.

An additional very important trend is that telecommuting, small electric vehicles and doorstep delivery services will steadily displace short-distance car travel over coming decades. People will eventually realize just how silly it is to haul 2 tons of metal over 50 miles of roadway day after day to go and do computer work that could be done just as efficiently from a home office. I have previously estimated the truly enormous economic benefits of telecommuting and small electric vehicles in this article.  The shear magnitude of these advantages and the great attractiveness of car-free neighborhoods and city centers will eventually take away most of the short-trip BEV sweet spot.

The greater capacity utilization potential offered by autonomous vehicles has led to great optimism regarding synergies with BEVs. Unfortunately, this optimism is unfounded because no clear fuel cost advantage exists relative to the highly efficient ICE options that would certainly be deployed for such high-utilization applications.

If anything, full autonomy will favor ICEs because traffic flow will be much smoother, greatly enhancing ICE efficiency and longevity. The clear BEV advantage of strong and efficient acceleration will be negated because autonomous vehicles will strive to minimize g-forces. In addition, high-utilization autonomous vehicles will regularly travel more than 300 miles per day, requiring either a costly large battery pack or lots of costly fast chargers that increase daytime peak load.

The future for ICE drivetrains

The next article will describe how ICE and (potentially) fuel cell vehicles might adapt in the longer term future to maximize efficiency, while minimizing costs and emissions. As a result, these vehicles will remain highly competitive with BEVs even as battery costs come down. The current deployment of BEVs in the US at a time when subsidies cover the entire battery pack cost gives a rough idea of how this could turn out: Good performance in the luxury/performance segment where battery pack costs are moderate compared to overall vehicle costs and rapid acceleration is highly valued, but poor performance in the mass-market where customers are mainly interested in low costs and convenience. The final part of my energy forecast takes a look at the popular topic of electric cars. Many predict enormous growth in this segment, but I believe other options like car-free lifestyles and efficiency will play bigger and more important roles.

Expect to see a lot more battery storage along with renewables in next few years.Learning curve for batteries is firmly in place. Prices will continue to drop.