Collaboration between governments, business leaders and energy experts is vital if energy efficiency is to enable a “meaningful energy transition”, said Fatih Birol, head of the International Energy Agency (IEA) at an international conference hosted by the organisation in Dublin, Ireland. Reducing volumes of wasted energy is often touted as key to creating a clean energy economy, but improvements in this direction have slowed in recent years. Various new initiatives are being set up to try to rectify this and reap the full potential of energy efficiency.

Over 400 people from 50 countries attended the event in June 2019 at which Birol called for more collaboration on energy efficiency, not less. He insisted on the central role of the “world’s very first fuel before renewables, oil and gas” to reduce greenhouse gases and bring energy to those in the emerging world. Wherever you go there is not a single government or business leader that does not want energy efficiency, said Birol.

Efficiency gains since 2000 prevented 12% more energy use than would have otherwise been the case in 2017, says recent analysis from the IEA. The agency estimates that the right efficiency policies could enable the world to achieve more than 40% of the emissions cuts needed to reach the Paris climate goals without new technology. But efficiency gains have been offset by increasing energy use — global energy demand rose by nearly 2% in 2017, says the IEA, causing energy-related carbon dioxide emissions to rise by 1.7% in 2018, the biggest increase since 2013. “This is a major worry,” said Birol.

In Dublin, the IEA launched a Global Commission for Urgent Action on Energy Efficiency with various “wise men and women” and Irish prime minister Leo Varadkar as honorary chairman. Ireland is ready and willing to play its part in the international drive for energy efficiency, Varadkar told the conference. The commission will examine how progress on energy efficiency can be rapidly accelerated through new and stronger policy action. Members include energy and environment ministers from around the world, Amani Abou-Zeid, African Union Commissioner for Energy and Infrastructure, Wan Gang, former Chinese Minister of Science and Technology, and business leaders from Shell, Siemens and the New York Power Authority.

In a further show of collaboration, an international energy efficiency hub was also announced at the conference. Initiated by the governments of Germany, the US, China and Japan, with support from Brazil and India, it aims to accelerate the adoption of energy efficiency policies and practices. Zhang Yong from China’s National Development and Reform Commission, stressed his country’s long-term commitment to cooperate on energy efficiency. “I hope we can collaborate further,” he said. The hub will be hosted by the IEA in Paris and build on the work of the International Partnership for Energy Efficiency Co-operation, which is mandated by the world’s 20 biggest economies.

The role of regulation in spearheading energy efficiency was a major theme of the conference.

From the US Department of Energy, under secretary Mark Menezes said legislation was not necessary to create greater energy savings. “Energy efficiency will continue to rise driven by policies that clearly favour innovation over regulation bringing forth new technology in a world characterised by energy abundance rather than scarcity,” he said.

But the role of regulation was robustly defended by other speakers, including Claude Turmes, Luxembourg’s energy minister and former long-time clean efficiency champion in the European Parliament. “It was only because we banned inefficient light bulbs that it was possible to bring LEDs to the market,” he said. Turmes recalled the introduction of eco-design standards in Europe and the response of companies such as HP and Whirlpool, who responded by saying: “You are crazy, you can’t drive us to such efficient measures.”

Europe probably has the most sophisticated energy legislation in the world, continued Turmes, but is still not achieving the emissions cuts climate scientists say are essential for avoiding catastrophic climate change. He called for deep energy efficiency measures for a “climate realistic world” backed by international standards. “If lobbyists are global, regulators must be global,” he said.

Regulations drive innovation and provide a challenge for business and the markets to meet, said Joao Saldanha de Azevedo Galamba, Portuguese secretary of state for energy. Tuuli Sarvilinna, vice president of business development at Danish industrial company Danfoss Drives, concurred. Ambitious regulation prompts “some moaning” from industry, but it is a good challenge for engineers, she said. “From the engineering perspective we have the tools. This is about political will and decision-making.”

Hennadiy Zubko, deputy prime minister of Ukraine, said energy efficiency had never previously been a government priority. He pointed to the enormous energy waste prompted by abundant flows of cheap Russian gas and “a Soviet model of usage”. The attitude in Ukraine changed in 2015 after joint efforts with Germany and the EU to implement EU directives in the country and the establishment of a new institute of energy efficiency. “We have incorporated the best experience from Lithuania, Poland and the Czech Republic,” said Zubko.

Birol said the IEA is helping push energy efficiency legislation in emerging countries around the world through training. In the past four years, the agency has trained over 1300 mid-level government officials from poorer countries on how to draft legislation to improve efficiency standards. The IEA also helps them monitor implementation of the standards.

Other speakers highlighted the importance of making energy efficiency measures simple for consumers.

Ulrich Benterbusch of the German federal ministry for economic affairs and energy said his country was completely overhauling its support measures for householders because they had become too confusing. “If you offer support it needs to be as easy as possible,” he said. Sandra Schoonhoven, head of global sustainability at Dutch bank ING, concurred. She said half the bank’s mortgage portfolio was not in a very good place and “needs an upgrade”. There is poor awareness among homeowners about how much carbon dioxide their houses produce and how to reduce these emissions, she said. “We need to make it really, really easy.”

Ensuring consumers save money as well as energy is key to triggering the necessary investment. Juergen Schneider, director general of the federal ministry for sustainability and tourism in Austria, said that by decreasing the price of public transport, the number of annual tickets sold more than doubled from 300,000 to 700,000 in a year.

Schoonhoven also highlighted the need for accurate data, a theme touched on by other speakers. “I know for sure people are not updating the energy data for their house,” she said.

But Laura Sandys, Chair of the Energy Data Taskforce in the UK, said it was time to stop asking the consumer to do the “heavy lifting” on energy efficiency and for the energy sector to “put itself under more pressure to do more with less”. There was “fuzzy policy with fuzzy outcomes”, lots of bad quality data silos and a system that incentivises the delivery of kilowatts, she said. Sandys advocated introducing incentives that reward permanently reduced energy demand as one solution.

Without a comprehensive assessment of the scale and type of funding needed, climate mitigation policies risk being bound to what is deemed politically possible rather than what is required by science

A holistic approach to how an oil refinery could transition towards low-carbon. 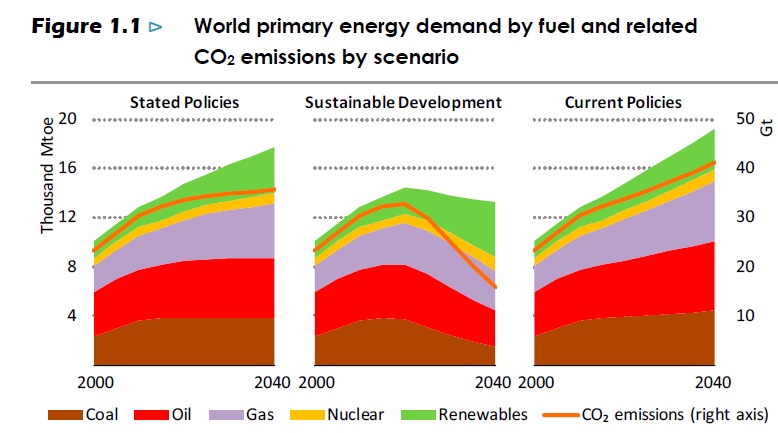 The International Energy Agency's World Energy Outlook may be pessimistic in its projections, according to Wood Mackenzie. The market research firm sees greater improvement in energy efficiency in industry, buildings and transport, so it expects..