The United States is a Net Energy Importer from Canada 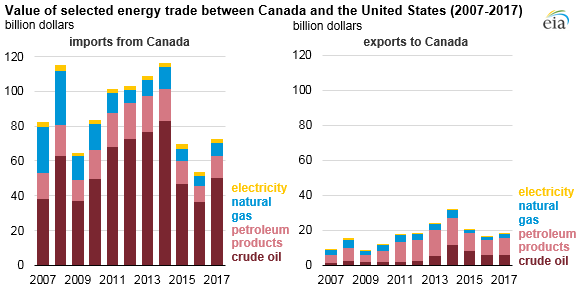 Canada is the largest energy trading partner of the United States, based on the combined value of energy exports and imports. Although the value of bilateral energy trade with Canada has varied over the past decade, driven primarily by changes in the prices of oil and natural gas, the overall structure of bilateral energy trade flows has changed relatively little, with the value of U.S. energy imports from Canada consistently exceeding the value of U.S. energy exports to Canada by a large margin. Increasing energy commodity prices in 2017 led to growth in the value of both exports to and imports from Canada. 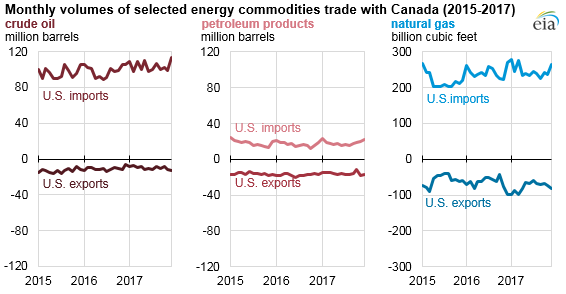 In contrast, very little of the petroleum products exported from the United States to Canada are finished transportation fuels. Pentanes plus, liquefied petroleum gases, and other oils constitute most U.S. product exports to Canada. Some of these products are used as a diluent to enable pipeline movement of heavy crude oils produced in Canada. Overall, U.S. petroleum product exports to Canada and other destinations have increased over the past decade. 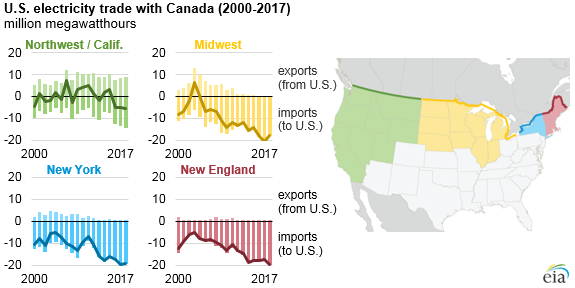 Source: U.S. Energy Information Administration, based on National Energy Board of Canada. Note: A small amount of electricity is traded by states outside the regions shown. The climate crisis can unite Canadians rather than dividing us as long as the country can “move forward in a way that leaves no one behind,” former tar sands/oil sands workers Bruce Wilson and Lliam Hildebrand write in an op ed this week for the...

Millions of dollars from foreign interests have been funneled into Canada to fund campaigns to stop the country’s oil and natural gas development and related infrastructure. Recently, the Alberta government launched an energy think tank, the... Community-based district energy systems are spreading across Canada despite steep up-front costs and tough competition from cheap natural gas, with innovative examples popping up in Vancouver, Yellowknife, Charlottetown, and more than 2,600...