Simon Donner is a professor in the Geography Department at the University of British Columbia who studies why the climate matters to people and aquatic ecosystems, including rivers and coral reefs.

The Vancouver Sun reports that Kinder Morgan, operator of the Trans Mountain pipeline that transports oil from Alberta to the Port of Vancouver, hopes to increase the capacity of the proposed pipeline “twinning” project. Here, I’ve updated previous estimates of embedded carbon emissions in proposed pipeline to the British Columbia (BC) coast. 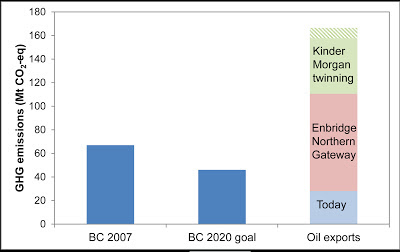 The annual flow of carbon through the proposed twinning project and the proposed Enbridge Northern Gateway project (presuming full operation) would dwarf greenhouse gas emissions from British Columbia, an issue presented here in the past. Carbon emissions embedded in the Northern Gateway project alone would be greater than current BC emissions, and close to twice the 2020 goal. With the proposed increase in capacity of the Kinder Morgan twinning project (shaded green), emissions embedded oil exports from the proposed pipelines would be more than twice the current emissions from within the province itself. Total oil exports from the BC coast would be equivalent to over 3.6 times the provincial emissions target for the year 2020. 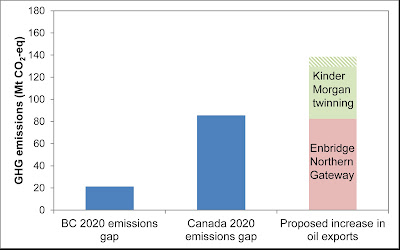 The second graph shows the estimated gap (i.e. necessary reductions) between the most recent national emissions estimate (2010, 692 Mt) and the policy goal for 2020 (17% reduction, ~607 Mt). The emissions embedded in the proposed Northern Gateway pipeline (82.5 Mt) is alone almost as great as the Canadian 2020 emissions gap (85.3 Mt). Add in the original Kinder Morgan proposal, the recent proposed bump in capacity, and the emissions embedded in oil exports of the pipeline would be 1.6 times the national emissions gap.

Ay, here’s the rub. Carbon exports are not included in a country’s emissions budget. The very reasonable international greenhouse gas accounting system allocates emissions to the country where the carbon, not the country where the carbon is extracted from the ground. From a pure accounting standpoint, BC and Canada’s carbon emissions would be affected by the construction and operation of the pipelines, but not the amount of oil or bitumen flowing through pipes to tankers on the coast.

The point here is about the greater challenge. The climate does not care where the carbon is burned. Should Canada bear some responsibility for the climate implications of extracting and transporting the carbon? Are we hypocrites to promote local emissions policies and controls while dramatically increasing exports of carbon to the rest of the world?

Naikun in talks with 'major offshore developer' for BC project

Naikun Wind Energy has provincial and regulatory approvals to develop the 400-MW Haida Energy Field offshore wind farm in the Pacific's Hecate Strait off the coast of the traditional territory of the Haida Nation, a Canadian First Nation.

Haida Gwaii, a small village of roughly 850 residents off the coast of British Columbia, Canada, is making moves to shift from diesel to renewable energy sources such as solar, wind and hydro. "We live in this beautiful place. We're very aware.. Earlier this year, I penned an op-ed outlining six ways that B.C. can defend the climate and economy in 2018. With the release of this year’s throne speech and budget, what progress has the B.C. government made so far? Here’s...

Spring flooding in Canada this year upended lives, inundated city streets and swamped houses, prompting calls for sandbags, seawalls and dikes to save communities. Ontario and Quebec's April rainfall was double the 30-year average. Thousands of..

Naikun in talks with 'major offshore developer' for BC project