Presidential candidates, state governments, and utilities are promoting “net zero” emissions targets to rapidly reduce greenhouse gas (GHG) emissions and preserve a safe climate future by helping to limit global warming to well below 2°C. But few of them are exploring exactly how the U.S. could achieve the ambitious goal of remaking its energy economy.

Energy Innovation previously modeled a scenario to achieve the U.S. Paris Agreement pledge using the peer-reviewed, free, and open-source Energy Policy Simulator (EPS); it now uses the EPS to explore an illustrative policy package to achieve net zero U.S. emissions. By 2050, the net zero pathway abates more than 6 Gt of emissions a year and saves more than 120,000 American lives per year due to reduced particulate pollution.

This article focusing on the electricity sector is the fourth in a series of four identifying policy combinations that can achieve net zero U.S. GHG emissions by 2050. Other articles in the series cover the industry, buildings, and transportation sectors. (While emissions reductions from land use and agriculture represent roughly a tenth of those needed to reach net zero emissions, this series does not focus on that sector.)

The Paris Agreement targets net zero emissions by 2050. More than 60 countries, including Germany and the United Kingdom, have set net zero by 2050 goals, showing that political momentum can spur climate action – if the policy path forward is clear.

Electricity generation is the backbone of the U.S. energy system and is responsible for 26% of U.S. emissions (Figure 1). 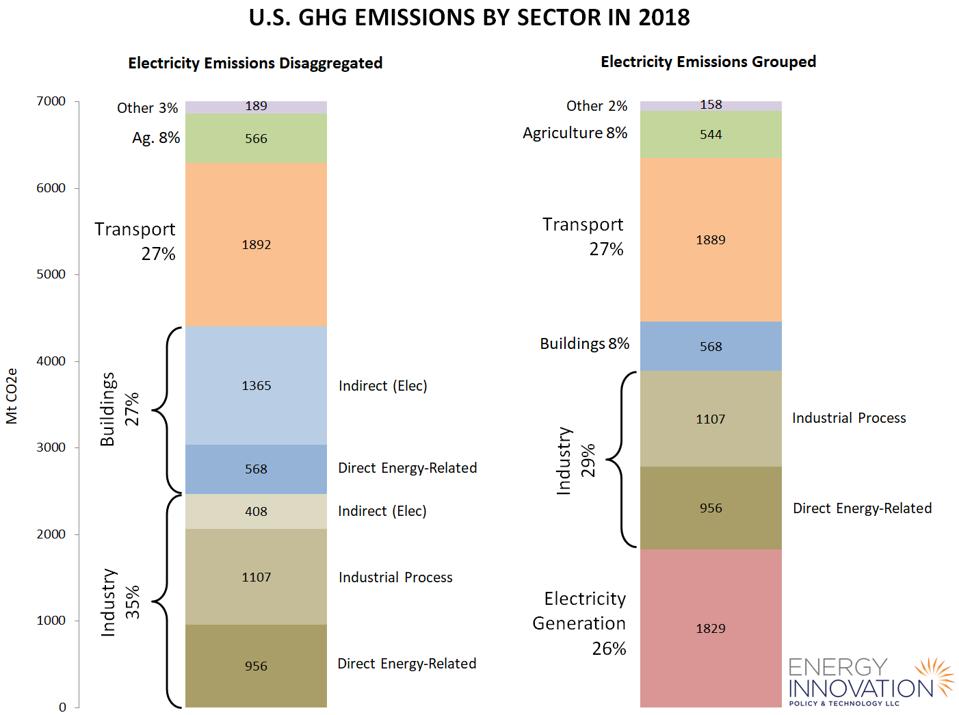 Today, most electricity is used in buildings (75%), followed by industry (22%). Transportation makes up a much smaller share at 0.2% but is expected to comprise a steadily growing share as electric vehicles gain market share through 2050 (Figure 2). Overall electricity demand is also expected to increase in a business-as-usual scenario as building electrification increases and vehicles transition from fossil fuels to cleaner, more efficient electric technologies. 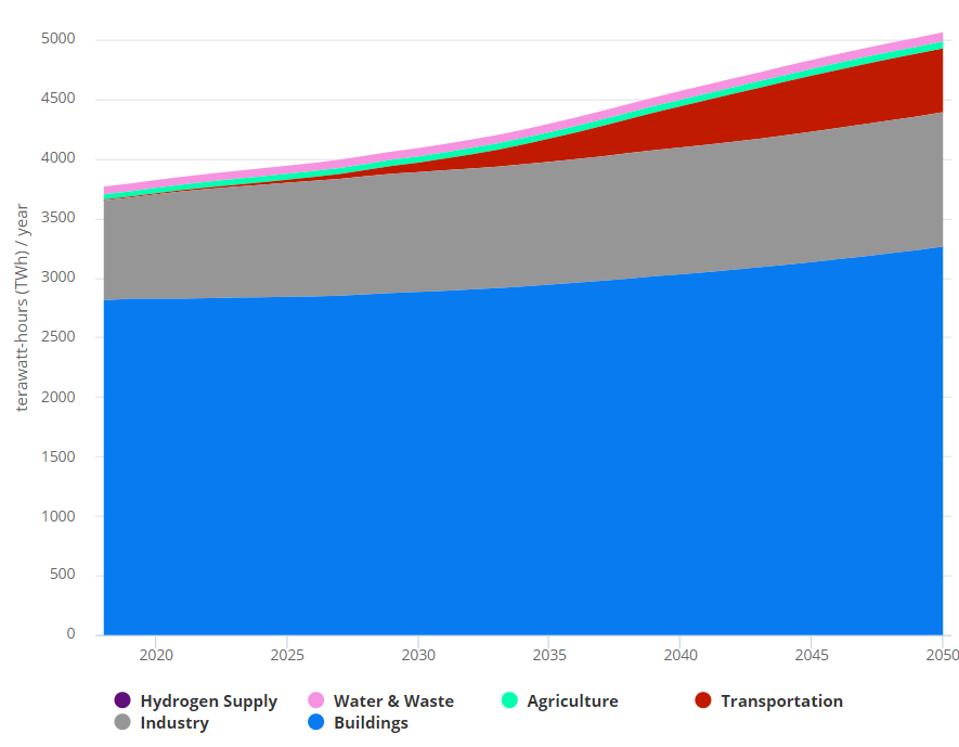 More than half of today’s electricity is produced by burning fossil fuels, although coal is on the decline – nearly 550 coal-fired power units have closed since 2010 as changing economics and litigation rendered them more expensive to operate than clean energy.

Nuclear and hydro make up the largest single sources of carbon-free electricity today at about 20% and 10%, respectively. However, wind and solar combined now compose about 10% of U.S. electricity generation and are projected to reach 30% by 2050 in a business-as-usual scenario, due to the fact that renewables are already undercutting other generation technologies on cost. Figure 3: U.S. electricity generation by source in a business as usual scenario. Data from the U.S. ... [+] 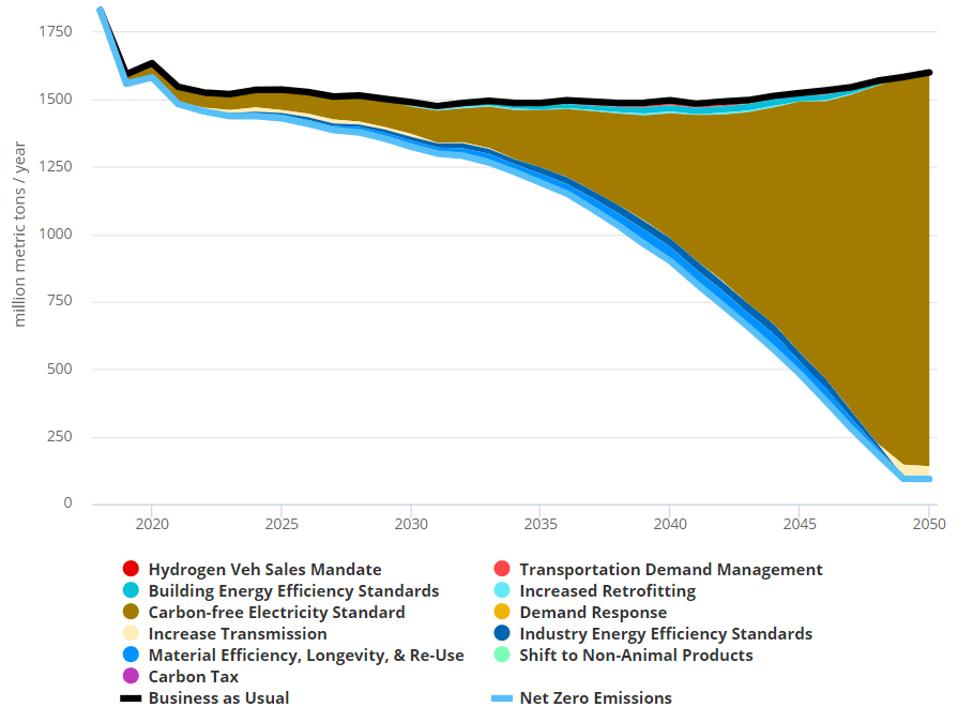 Carbon-free electricity standard (85% of abatement): Many policy options exist for decarbonizing U.S. electricity generation, but the most effective are clean energy standards (CES) or renewable portfolio standards (RPS). These policies require a certain share of generation to come from zero-carbon electricity by a specific date.

As states and regions begin to set standards in the 80-100% range, they have generally shifted to “clean” energy rather than “renewable” energy standards. This broadens the qualifying resources to include hydro, nuclear, or any other zero-carbon electricity source that can win on cost in the marketplace to begin operation before the policy end-date.

The second complementary policy is expanding grid flexibility to help manage electricity demand by shifting when consumers use power, reducing peak demand, and deploying grid-scale storage. The net zero pathway incorporates more than 200 GW of demand response by 2050 – about half the potential identified by the Federal Energy Regulatory Commission and less aggressive than the 200 GW by 2030 potential identified by The Brattle Group – and encourages investments to spur an additional 5% annual battery storage capacity growth, allowing the grid to store clean electricity for when it’s most needed.

Policies in other sectors (14%): While decarbonizing electricity generation in the net zero pathway is driven by the CES and complementary policies, policies in industry, buildings, and transportation also contribute by reducing electricity demand.

The net zero policy pathway shifts electricity from mostly natural gas and coal to 70% wind and solar by 2050 (Figure 5), even as total electricity demand more than doubles due to aggressive electrification measures in other sectors. The most significant declines in natural gas and coal occur between 2045 and 2050, where decarbonization actually occurs ahead of the CES schedule as growth in electricity demand begins to slow and cheap renewables contribute the overwhelming majority of generation.

Offshore wind becomes increasingly important after 2035, as cost declines boost its competitiveness, while nuclear and hydro generation also grow by a modest amount. The forecast assumes a small amount of generation still comes from natural gas peaker plants, which could be used to maintain grid flexibility while running only a small number of hours each year, meaning less than 100 MMT power sector emissions remain in 2050. These emissions are counterbalanced by carbon sequestration in the land use and forestry sector. Figure 5: U.S. electricity generation by source in the net zero pathway. Data from the U.S. Energy ... [+]

This step change in electricity generation requires significant new renewables capacity. Compared to business-as-usual, the net zero pathway adds about 750 GW wind and 550 GW solar by 2050. This increase in existing renewable generation capacity, which totaled only 95 GW wind and 30 GW solar in 2018, would require a massive construction campaign.

This efforts would not be unprecedented – the U.S. built 250,000 miles of rural power lines between 1935-1940 and added 10,400 miles to the interstate highway system between 1956-1961. And, the maximum required annual wind and solar installation rate, about 24 GW/year of each resource, is less than China’s recent renewables installation rate. 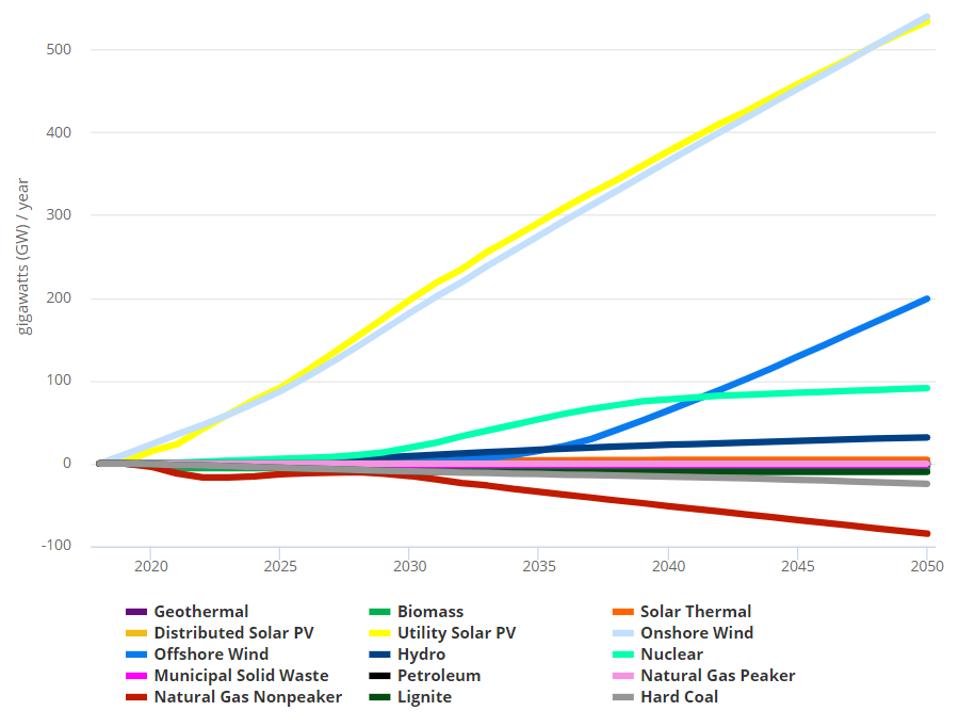 Figure 6: Changes in electricity generation capacity (compared to business-as-usual) in the net zero ... [+]

Decarbonizing electricity generation is critical to achieving net zero emissions. Not only does it contribute a quarter of today’s emissions, but it helps decarbonize all other sectors, which rely upon electrification and hydrogen (produced with zero-carbon electricity) to transition off fossil fuels.

Clearing the way for 100% clean electricity through a clean energy standard, complementary power sector policies, and controlling electricity demand growth, are linchpins of a decarbonized economy.