Elias Hinckley is a strategic advisor on energy finance and energy policy to investors, energy companies and governments. He is an energy and tax partner with the law firm Sullivan and Worcester...

Energy use in the US can be split into two large (very, very large) pies. One is electricity for use in homes, buildings, and industry, and the other is transportation, which is powered primarily by liquid fuels (gasoline and diesel) from oil. There are some exceptions, and small overlapping fuel uses – direct industrial use of liquid fuel (a fairly significant quantity), some liquids burned to make electricity (this used to be a significant amount, but is now only a very small amount), and now a very small amount of electricity used to power electric vehicles (“EVs”).

American consumers spend, on average more than $1 billion every day oneach of these energy uses. 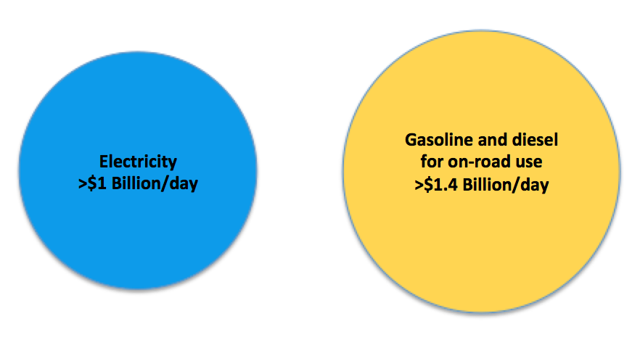 Within the past few years a tremendous technological transformation has occurred, and the barriers for an electric company to entertain unprecedented growth potential by devouring a large piece of the oil companies’ share of the U.S. energy market for transportation now sits clearly within reach.

There are now better batteries, faster charging options, and proven full electric vehicles led by Tesla and the Nissan Leaf, along with full electric or plug-in hybrids either in production or planned from virtually every auto manufacturer. This evolution has happened independently of the electric utilities, and other than a handful of forays into replacing their own fleet vehicles or sponsoring a handful of EV charging stations, they have been little more than observers to this evolution.

The opportunity is hanging ripe in front of the electric industry. Yet the industry seems more focused on something called (among many things) “the utility death spiral.” The risk to utilities is real – a combination of distributed energy, energy efficiency, changing behavior and weak economic growth has resulted in virtually no growth for new electricity demand since 2008, and going forward will force higher rates for each unit of electricity sold, which in turn makes the alternative technologies more attractive and accelerates consumer adoption. While the risk is real, it only relates to a (so far very small) portion of any utility’s total sales of electricity – the real threat is declining profitability, which will impair access to low-cost capital, which is the life-blood of an asset-intense business like an electric utility.

While electric utilities draw up battle lines and strategies for this changing energy landscape, they have virtually ignored perhaps the greatest growth opportunity the industry has ever had. By attacking the market for the energy used in transportation, electric companies can not only offset slowly sinking demand, but can also drive huge new revenue growth throughout the industry, solving concerns over the demand threat from efficiency and on-site generation and providing more time to adapt.

By proactively and aggressively accelerating the widespread adoption of EVs and plug-in hybrids, the electric industry can rapidly consume a significant portion of the revenue from the energy market for transportation. A recent report from the United Nations went so far as to suggest that with enough support, EVs could make up 100% of vehicle sales in the U.S. within 15 years. 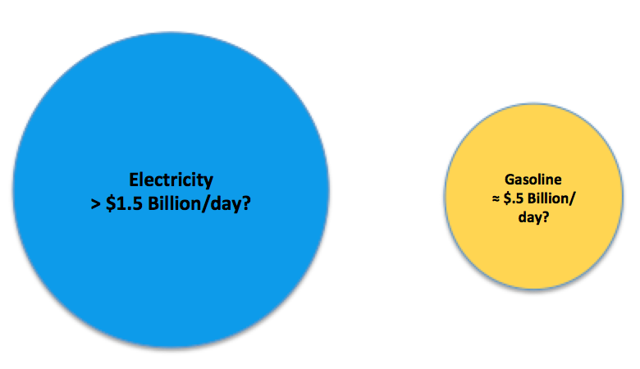 Electricity as a fuel source will actually cost consumers significantly less per mile than they currently pay for gasoline, so the increased share to electric companies won’t be dollar for dollar (though some demand rebound is quite possible).

There are of course challenges – range anxiety, insufficient vehicle charging infrastructure in many areas, limits on the affordability of better battery technology and a lack of consumer confidence in the new technology. The solution to each of these challenges can, however, be accelerated or overcome through faster deployment of infrastructure and consumer education.

Electric utilities are perfectly positioned to manage both the infrastructure needs and to accelerate understanding and acceptance of EV technology. There are any number of ways this could be accomplished, but here are a few:

All of these strategies would lead to the likely permanent capture of consumers’ transport energy purchases, because the emotional hurdle and the infrastructure needs would both be solved. Perhaps more important would be the clear signal that a market was growing and available. Money would flow into technology development, auto manufacturers would accelerate new EVs to market, and that scale would force down costs and drive the deployment of more infrastructure, creating a cycle that would accelerate the change in the market.

About More Than Money

There are three reasons why accelerating this transition would be good for America, and not just utility owners.

A number of state and local governments have begun to develop policies to support the EV market. Electric companies could use this policy support to further facilitate their efforts to accelerate the transition to EVs.

Despite the clear benefits to the industry and to the nation, it remains unclear how this evolution will play out. The electrification of transportation is progressing, but there are threats – the potential for cheap biofuels or fuel cells could prevent wide-scale conversion to EVs – and other than Tesla, vehicle manufacturers can remain relatively agnostic to the change. It is electric companies with the most to gain by driving this transition.

Most utilities have been slow to react to rapidly changing technology (worth noting that under existing regulatory frameworks, there is little incentive to do so). There are exceptions – NRG stands out – but no established electric company has been as proactive or aggressive as their owners should have demanded given the scale of the opportunity to take command of America’s energy market for transportation.

Two words come to mind when characterizing the utilities industry over the past decade: disruption and transformation. Essentially, the unprecedented disruption in the market required significant transformation by utilities to adapt to changing..