A nonpartisan, nonprofit organization, the mission of the Great Plains Institute is to transform the energy system to benefit the economy and environment. We combine a unique consensus-building... In the Midwest, powerful market drivers are creating an attractive environment for investors and developers to build more renewable energy projects and infrastructure. Declining technology costs for utility-scale wind and solar are combined in the region with an abundance of wind and solar resources. As utility-scale renewable energy projects increase across the region, it is important for communities to have an understanding of these market drivers and to prepare for project development and siting.

This is the first post in a three-part series about increasing long-term market understanding in communities that can help them be prepared for utility-scale wind and solar project siting in the Midwest. Future posts will include these topics:

Between January and August 2019, the amount of utility-scale solar and wind energy in the Midcontinent Independent System Operator’s (MISO) interconnection queue jumped by 3,000 MW. For comparison, that’s roughly four times the total wind and solar energy online in Minnesota today. This trend of increased utility-scale renewables is consistent across the Midwest, particularly in Wisconsin and Iowa, along with a renewable energy market that is increasingly favorable to wind and solar deployment. As of 2018, wind was the cheapest form of energy, out-competing conventional fossil fuels and other renewables, and its cost continues to decline. Solar is on track to achieve that same parity within the next five years. As a result, wind and solar energy are among the least expensive forms of electric generation in the country. 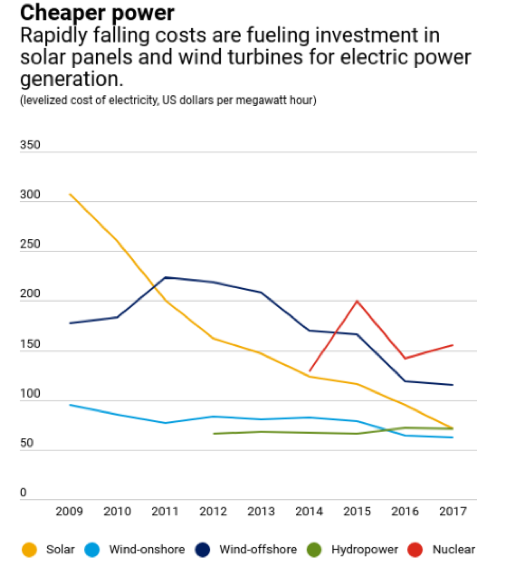 Along with these cost reductions is an increase in commitments by utilities and major corporations in the Midwest to substantially reduce or eliminate their carbon emissions over time. Minnesota’s Xcel Energy, for example, became the first utility in the US to set a goal of 100 percent carbon-free electricity by 2050. Companies are also setting goals for more renewable and carbon-free energy and are increasingly procuring large amounts of renewable energy across the country.

What is utility-scale wind and solar?

Solar and wind development come in many forms–from a single wind turbine at a university to a solar development with thousands of panels. The differences between developing utility-scale and non-utility-scale wind and solar projects, described in table 1, involve unique planning considerations and challenges.

Table 1. Breakdown of what constitutes utility-scale wind and solar and what does not.

What Do Market Trends Mean to Local Municipalities?

These high-level trends for utility-scale renewables have a local impact: communities are going to see more wind and solar development projects, more often. Utility-scale wind and solar development will play an increasing role in the land use and economic development decisions of communities across the Midwest. However, the current readiness of Midwestern communities to prepare and respond to that increased volume of market interest varies significantly. Similarly, the way that communities want to approach that increasing volume will depend on community-specific values, goals, and future vision–as well as the inherent quality of the local solar and wind resources for each community.

The ability to accommodate and prepare for these projects requires new information, education, and understanding. The following maps (see original post for full slideshow of maps) provide an overview of the solar and wind resource for the three states in the Midwest where GPI is working on utility-scale renewables with communities–Minnesota, Iowa, and Wisconsin. These maps are examples of the kind of information that can help communities understand their local, state, and regional energy resource potential. More specifically, these visualizations provide insight into where wind and solar energy resources are greatest in the state (e.g., where the wind is the fastest, or where the sun shines most brightly, though resource alone does not necessarily determine project feasibility). For both wind and solar, large, flat, and uninterrupted tracts of land are typically going to harbor the most powerful resources. For wind, as a rule of thumb, wind speeds of 10-13 mph or greater are generally the threshold for utility-scale wind deployment. For solar, the greater the relative solar resource, the better. The ability to gauge the quality of solar resource is less intuitive on a large scale, as many site-specific conditions can impact the quality of the resource and there are increasing solar technology developments to accommodate site-specific concerns like shading. Though the granularity of the data varies somewhat by state, these maps are best for use at the city-scale or larger, where they can be used to assess relative resource potential. It’s also important to note that they should not replace location-specific siting assessments for anyone considering a project or development.

Through funding from the Energy Foundation, GPI is working to bridge the gap between market forces and community readiness through creation of resources for Midwestern counties to prepare them for utility-scale wind and solar deployment. We’re working with 10 communities to dig deeper into their local considerations through community-specific workshops to help understand both opportunity and risk at the local level. These workshops are geared toward county-level decision makers, such as county boards, planning boards, and steering committees.

Sign-up for the GPI monthly newsletter to receive the next installment of this series, which will focus on local siting considerations.

Petition is first move towards New York’s aggressive goal of 6,000 Megawatts of solar by 2025Introduction