Prior to joining Greentech Media, Eric Wesoff founded Sage Marketing Partners in 2000 to provide sales and marketing-consulting services to venture-capital firms and their portfolio companies in...

Cheapest Solar Ever? Austin Energy Buys PV From SunEdison at 5 Cents per Kilowatt-Hour

Texas utility Austin Energy is going to be paying 5 cents per kilowatt-hour for solar power, and it could mean lower customer rates.

City-owned Austin Energy is about to sign a 25-year PPA with Sun Edison for 150 megawatts of solar power at “just below” 5 cents per kilowatt-hour. The power will come from two West Texas solar facilities, according to reports in the Austin American-Statesman. According to reports, around 30 proposals were at prices near SunEdison’s. Austin Energy has suggested that the PV deal will slightly lower rates for customers.

This is one of the lowest, if not the lowest, reported prices for contracted solar that we have seen. Last year, First Solar (FSLR) entered a 25-year PPA in New Mexico for 50 megawatts of solar power at 5.79 cents per kilowatt-hour. That number included a significant PTC from the state. The Macho Springs project, the Austin project and most solar projects of this nature rely on the 30 percent federal Investment Tax Credit.

Austin Energy’s net sub-five cent price does not include any state PTC, according to Monty Humble of energy development firm Brightman Energy LLC. He said that the utility was “to be commended” for this solicitation. Humble added, “Based on our analysis, it can be done. There’s not a whole lot of profit in it, but it’s not a loss leader. It’s a legitimate bid.”

GTM Solar Analyst Cory Honeyman points out that “new PPAs signed in North Carolina fetched prices between 4.5 and 5 cents per kilowatt-hour.” Like Macho Springs, those projects could also take advantage of an in-state tax credit to make the economics work. Honeyman said that none of the projects in Georgia or North Carolina were larger than 20 megawatts, so 5 cents does seem like “an unprecedented low for large-scale projects.”

Bret Kadison, COO of Austin-based Brazos Resources, an energy investment firm, said this was “a highly competitive solicitation.” Although historically, “Texas hasn’t been a hotbed of solar, you’re starting to see that change. ERCOT needs the generation.”

He expects to see more solar activity “not just as a green source of energy, but as an affordable source of energy. Texas is seeing economic growth, but the power grid has not kept pace.” Kadison added, “When you think about the volatility of natural gas, a 25-year PPA starts to look pretty attractive.”

Kadison notes, “This is below the all-in cost of natural gas generation, even with low fuel prices and before factoring in commodity volatility and cost overruns.” He also points out that the original RFP was for 50 megawatts, but the utility ended up buying 150 megawatts “in a red state where hydrocarbons dominate the political landscape.” Kadison suggests that “one of the biggest cost reduction drivers that allowed solar to reach this parity came from the massive reduction in financing costs.”

The 5-cent price falls below Austin Energy’s estimates for natural gas at 7 cents, coal at 10 cents and nuclear at 13 cents. The utility points out that it approved a 16.5-cent price for the Webberville solar plant in 2009.

Austin Energy has a 35 percent renewable energy resource goal by 2016 and a solar goal of 200 megawatts by 2020. The utility is currently at about 25 percent, much of it made up by its 850 megawatts of wind.

Humble of Brightman Energy said, “I expect that this will force a lot of players to reexamine their approach and get far more aggressive. Because of the size of the ERCOT market and the size of the state, Texas is potentially the largest solar market in the country.” According to GTM Research’s 2013 U.S. SMI report, Texas ranked 8th in the nation with 75 megawatts installed in 2013.

GTM’s Honeyman notes, “This is the second major announcement in which a utility has stated plans to procure more than 100 megawatts of solar PV based on its cost-competitiveness with natural gas, as opposed to RPS-driven demand.”

If developers continue to bid in at these prices — it won’t be the last.

The author of this commentary in the New York Post dissects the electric sector impacts of the carbon reduction legislation passed by the state legislature. It's not a pretty picture. Do you agree or disagree that the legislation overreaches and.. 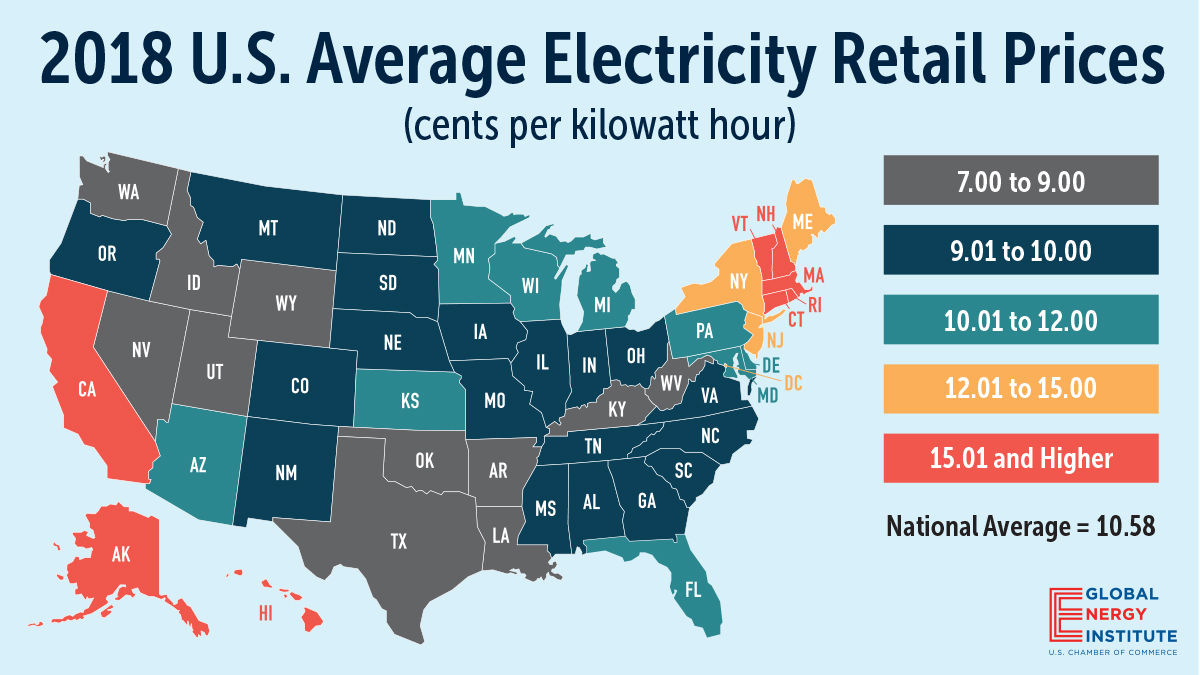 Do customers matter? Yes, a silly question .... until one looks at the major conclusion of this latest comparison of state electricity prices, i.e., " a growing backlog of needed natural gas delivery infrastructure is more than offsetting the..

An exciting startup in Austin is making rooftop solar-panels that are shielded from weather, meaning they don't have to be connected to a generator. This could be a big development.