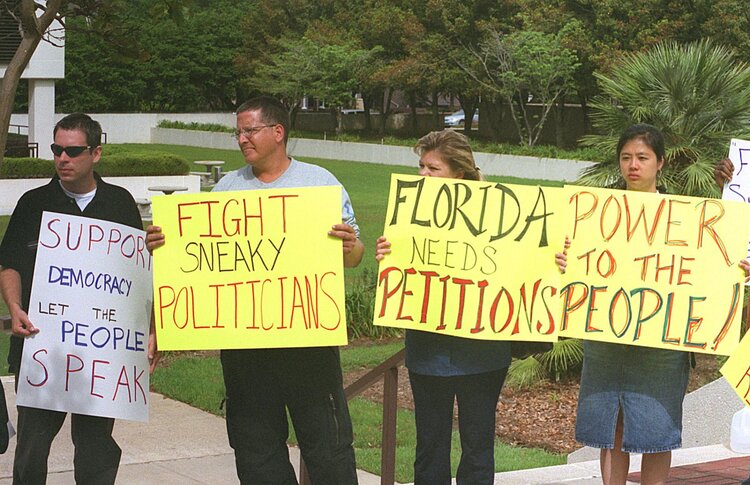 The push to put retail energy choice on the ballot in Florida has been going on for well over a year. With the 2020 election now officially less than a year away, opposition to the grassroots initiative in the Sunshine State is turning up the heat and turning to dirty tricks to stop Floridians from having their say.

The advocacy group Citizens for Energy Choices has been collecting signatures for months to put the issue of whether Floridians should have the right to choose their power provider and generate and sell electricity on the 2020 ballot.

Energy choice is one of a handful of ballot proposals seeking to amend the state constitution that are currently jockeying for attention in Florida.

The group, Citizens for Energy Choices, is asking voters to approve an amendment that would give electricity customers the right to choose “from multiple providers in competitive wholesale and retail electricity markets, or by producing electricity themselves or in association with others, and shall not be forced to purchase electricity from one provider.”

Proponents say the measure ensures the state’s electricity markets are “fully competitive so that electricity customers are afforded meaningful choices among the wide variety of competing electricity providers.”

Despite opposition from the state’s big investor-owned utilities – Duke Energy and NextEra Energy, which owns Florida Power & Light Co. and Gulf Power Co. – the organizers of the energy choice campaign raised nearly $4 million as of September and collected nearly half a million signatures of the 766,200 needed to qualify for the 2020 ballot. The deadline for qualifying is February 1.

The first big swing from the opposition was an attempt to throw out the potential ballot initiative through the courts. Opponents – including both the Florida House and Senate – argued the initiative language was confusing and misleading. Florida’s Attorney General argued that “voters simply will not be able to understand the true meaning and ramifications of the proposed amendment” during oral arguments before the state’s Supreme Court.

The effort is an attempt to take deny Florida voters the right to have a say on where their energy comes from. On the other side, the chairman of Citizens for Energy Choices, Alex Patton, noted that his group has “far more respect” for voters than the institutions attempting to block the initiative from appearing on the ballot.

“It’s not a secret what we’re really doing,” Jacoby wrote. “We are offering you and your people a higher-paying initiative to ensure that they don’t work for our client’s opposition, which is the utilities initiative.”

Another tactic being employed by opponents of the ballot measure is hiring signature gathers away from Citizens for Energy Choices with the lure of more money and having them sign non-compete clauses.

Attempts by the state’s utility giants and the Florida Chamber of Commerce to thwart the public legislative process have raised questions about whose interests they are serving.

The Florida Supreme Court heard oral arguments in the case challenging the ballot language in late August but has not yet issued its decision.

Allies of the big utilities have taken to the op-ed pages of Florida’s newspapers to challenge the motives of energy choice advocates. The resulting commentaries have attempted to mislead and confuse readers about the intent of the ballot initiative.

Eric Silagy, CEO of Florida Power & Light, published an op-ed in the Sun Sentinel earlier this year that was rife with misinformation that has repeatedly been debunked time and again. Silagy claimed that “deregulating electricity markets doesn’t work for the party that matters most – residential customers.”

But studies have shown the opposite to be true – the lack of competition leads to higher increases in electricity rates compared to competitive-market states. In fact, rate increases were nearly 20 percent higher from 1997 to 2018 in states without energy choice compared with states with energy choice, and a study on the effect of energy choice in Texas found that average residential electricity prices in deregulated areas declined more than 23 percent between 2008 and 2017, while average residential prices in regulated markets slightly increased during the same period.

In the op-ed, Silagy argues that FP&L’s customers pay, on average, nearly 20 percent less than residential customers in Texas, and cites a June 2019 report from the Energy Information Administration to back up his claim. He goes on to say that FP&L customers pay less than every single deregulated market in the United States. This claim is wrong and overlooks the benefits of geography that Florida utilities enjoy.

According to the EIA, more than 60 percent of the price of power comes from generation, a majority of which is fuel costs and the costs to operate and maintain generating facilities. These costs exist for power providers regardless of whether they are in a state with energy choice or not. Florida benefits from low fuel costs, and that is responsible for the lower-than-average prices more than anything else. Advocates for energy choice maintain that customers would see even lower prices in a competitive market.

Silagy goes on to argue that reorganizing Florida’s electricity market would threaten the state’s progress on adopting cleaner sources of energy. This point is particularly deceptive as the chairman of Citizens for Energy Choice has pointed out. The adoption of cleaner energy sources by Florida’s incumbent utilities is a result of consumer demand and the push to open the market to more competition. Without the threat of competition or, more costly, a government mandate, it’s unlikely the utility giants would be building renewable energy facilities.

Silagy’s commentary was just one of the misleading pieces published in recent months. Other attempts to dissuade voters from adopting competitive market reforms include articles by Tallahassee Commissioner Gil Ziffer, a former member of Florida House of Representatives Joseph Gibbons, and the political advocacy group FARE.

To say there’s a full-court press to dissuade Florida voters from embracing competition would be an understatement.

Attempts to Get Ballot Signers to Revoke Their Signatures

Readership of local newspapers being what it is these days, it’s no surprise that opponents of the ballot measure have begun targeting voters directly.

As reported by the Miami Herald, a political action committee backed by two Miami political consultants with ties to Florida Power & Light, Floridians for Truth, this fall sent an eight-page letter to Florida residents who signed the petition to get the constitutional amendment on the ballot urging them to not only oppose the proposal but to rescind their petition signatures.

The move would appear to be a waste of money since Florida does not permit someone to remove their signature once they’ve signed a petition, however, the letter indicates that its real intention is to gather counter signatures to present to the state’s Supreme Court in the legal fight to try to get the ballot initiative disqualified.

The mailer claims voters who supported the amendment language were being “duped” and “swindled,” but a poll conducted by St. Pete Polls found that roughly two-thirds of voters supported the energy choice language.

Punishing Those Who Support Energy Choice

When persuasion doesn’t work, try punishment. That appears to be the thinking of those opposed to competition in Florida.

According to an the Miami Herald, Florida Power & Light was planning to roll out its “SolarTogether” program, which would have allowed customers to purchase renewable energy from the incumbent utility. The plan was scuttled after a video recording of an internal meeting showed that the utility intended to limit participation to only customers it deemed as being loyal.

The original proposal, filed March 13, included an exclusionary penalty for customers who do not support the “continuity of the program,” specifically those who support deregulation efforts like the Citizens for Energy Choices ballot initiative, according to Public Service Commission documents and video recordings of a public meeting obtained by the Miami Herald.

In translation, that means residents who supported the energy choice amendment effort would not be eligible for the program. The program’s unique eligibility requirements were dropped after reporters started asking questions of Florida Power & Light executive.

Likely to Get Worse Before it Gets Better

There’s nothing new about entrenched special interests spending a small fortune to protect their monopoly status. Opponents of competition spent about $63 million to defeat an energy choice ballot initiative in Nevada last year.

While political spending is good for the owners of media companies and the consultants who direct it, all those mailers and online ads can be downright annoying to the regular voter. The situation is likely to get worse before it gets better, though. Proponents of the Florida ballot initiative have until Feb. 1 to gather the required signatures.

Opponents of competition have demonstrated that they are willing to do almost anything to keep the language off the ballot and let voters decide the issue. There’s no reason to expect the dirty tricks and disinformation about the benefits of competition to stop before the deadline.

If Citizens for Energy Choices is successful in gathering the necessary signatures – and the state Supreme Court approves the ballot language – then Florida voters should expect the current fight to last all the way up to Election Day. Whoever said “freedom isn’t free” wasn’t kidding.